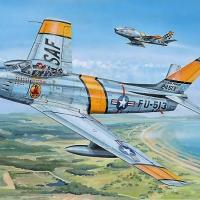 Hobby Boss has released another large, 1/18th scale aircraft for your modeling enjoyment. Along with their 1/18th Me262, FW 190, Harrier and Huey we now have the F-86 F-30 'Sabre' to grace our ceilings. (About the only place to display this behemoth.)

Some of you may be having flashbacks but these kits seem to resemble those that were once available from Merit International and before that 21st Century Toys. The markings in this kit are similar to those offered by Merit International, so I'm going with the inference that this Sabre kit may once have been marketed by someone else.

The kit does contain one hundred ninety plus parts on thirteen light gray plastic sprues plus fuselage There is, amongst that number, a small sprue of clear bits for the windshield/canopy and landing lights. Hobby Boss has thoughtfully included a counter weight for the non-tail dragging version of the Sabre and a 'cloth-like' material for the seat belts with plastic bits the buckles and such. There is a soft vinyl, multi-part pilot figure included that actually fits in the cockpit. There are color call-outs referenced in the assembly instructions for Mr. Hobby, Vallejo, Model Master, Tamiya and Humbrol paints. Alas, those color call outs are limited to the cockpit area. You'll need to check references for the color of the gun bays, wheel wells, etc., although some shade of chromatic green is a safe bet. There are some additional color references on the separate marking & painting guide.

Construction begins with the forward gear well and cockpit. The supplied nose weight is attached to this assembly and both fit snugly into the forward section of the fuselage. It may be prudent to add some more weight to the nose to avoid the dreaded tail sitting stance common to tricycle landing models. A nicely detailed instrument panel is provided with decals for the instrument faces. The instrument bezels are supplied as a separate part which will definitely aid in painting. A throttle control lever and control column are provided as are sidewall details, these all being separate parts. Purist may wish to embellish this area as any additional details added here (or anywhere for that matter) will differently been seen and appreciated.

The next few assembly steps are for the jet engine intake and exhaust trunks. Those trunks are molded in halves which are split horizontally. You will have a nasty seam to deal with but FOD covers for those trunks are thoughtfully provided with the model. So maybe not the entire seam will need to be dealt with and in the case of the exhaust pipe not at all as the FOD cover is flush with end of the exhaust trunk.

Fuselage detail is next with partial fifty-caliber guns and flexible vinyl ammo belts for both gun bays. The access doors for the gun bays and ammo bins have some nice molded detail and are pose-able. Dive brake detail is provided with a separate part and an actuator piston for the interior of those doors. The actuator piston 'folds' into a depression on the interior of the dive brake and the entire door can be positioned either opened or closed on the finished model. These doors (gear, ammo bay, dive brakes) all have ejector pin depressions that you may wish to remove with some light sanding. There is a small dimple just to the rear of the dive brake opening and main landing gear doors that facilitates opening the closed doors. Should you not wish to have workable features on your F- 86 some filling and sanding may be involved to remove that dimple (see image).

Some lovely canopy details (compass antenna, etc.) are molded into the part immediately behind the pilot. The canopy does slide open and closed. The Sabre was equipped with Bolton fusible conductors that were embedded into the canopy glazing. These devices were there to aid in the destruction of the canopy upon ejection and are missing from the kit. Another item that some may find wanting is the absence of degree markings that were used by the pilot to judge dive angle. Some fix may seem necessary (printing your own decal) but in Hobby Boss’s defense most other kit manufactures don't include these items either. The clear parts seem to be modeled in clear polyvinyl. While this is a safer material than clear plastic it doesn't lend itself to a crystal, clear canopy. Some polishing compound (Novus ?) might remedy that situation and provide you with a clearer canopy. But the polyvinyl canopy does lend credence to my theory on the origin story of this kit.

The nose gear and rudder are next up in the assembly sequence, as are the control surfaces (flaps, rudder, stabilizers, etc.). The landing gear struts on this kit are somewhat simplified in design and lack a certain degree of molded detail. They are, after all, designed to be functional. Consequently, you may wish to add some bolt heads, brake lines and linkage to the landing gear struts if you wish to have a more realistic looking Sabre. Adding that detail shouldn't present much of a problem as the scale of this kit (1/18th) is going to assist in making that happen. The tires are molded in a soft black vinyl, and while tread-less, do look the part. The tires get in-fixed between cool looking inner and outer hubs.

All of the large assemblies (fuselage and wings) are held together with small screws. Plastic bits are provided to plug the screw holes. However, you will need to supple your own screwdriver. Individual flaps and ailerons get sandwiched between the wing halves along with the main landing gear struts via more screws. The two wing assemblies are tied together and that entire unit gets attached to the fuselage with some more screws. (Don’t fret, you should be out of screws by now.) Horizontal stabilizers, with their movable control surfaces, are added next which pretty much completes the construction part, except for the under-wing stores.

This 'Sabre' kit from Hobby Boss includes your choice of external tanks or Sidewinder missiles on launch rails. While the missiles are supposed to plug into the same holes as the external tanks you may want to set these aside for a Korean War aircraft. For one thing, the Sabre’s of the Korean War didn't have the Sidewinder and second, the use of Sidewinder wasn't a tradeoff against the drop tanks. The Sidewinder missile rails were actually mounted inboard of the external fuel tanks. It should be noted that the anti-sway braces for the drop tank pylons are not provided but as it is intended that you can switch the drop tanks out for the missiles, anti-sway braces would just get in the way. Should you build this kit as a display model then the addition of a fuel vent and some guide vanes on the fins of the fuel tanks might be a consideration as those items were not included with items in the box.

The only remaining assembly step is to add the pitot tube and then it is on to painting this beast. Should be inclined to use Alclad paints for the natural metal finish you may want to get a quart size jar of paint. ;) Hobby Boss only provides one marking option and that is for an F-86F-30 flown by Major James Jabar during the Korean War. Major Jabar was the first American jet ace, so maybe not so disappointing to only have one marking option after all. Those decals include a number of stencils that adorned the F-86.

The kit supplied markings are very thin and take almost no time at all to soak off their backing paper. This characteristic tends to make the decals a bit on the fragile side and can contribute to them breaking apart. The only problem areas for me involved placing the wing walk stripping (#'s 35/47) and the turbine warning strip (#'s 59,60,61) around the fuselage. . It is worth noting that the marking & painting guide does illustrate the upper wing star and bars (#65) upside down. While most US wing markings on F-86's Sabres were positioned perpendicular to the center line of the aircraft, I chose to place mine canted and parallel with the center line of the wing. You are, after all, the Bruno Mars of where you place your star and bars.

The distinctive, yellow recognition markings on Korean War Sabre’s will need to be applied by hand but decals are provided for the black accent banding common to those markings. Sadly, Hobby Boss does not include any detailed measurements or position details for those yellow bands, so best guess or a handy reference may be in order. The problematic one will be the fuselage band as the wing and tail marking kind of follow panel lines. I suppose one could scale up some existing decals and print your own...? I elected to go with a hybrid scheme using the kit supplied markings and lots of artistic license. Remember, this model did begin life as a scale model toy and I for one am delighted that Hobby Boss has brought it back into the light, so to speak.

Don't overlook the pilot figure. It is molded in a soft, black vinyl and has articulated leg and arm joints. While the pilot figure may seem a bit toy-like the crafty modeler could add some putty here and there, do a bit of in-house sculpting and come away with a more than passable pilot figure for this enormous aircraft model. The figure does have a nicely molded head with a separate oxygen mask.

This is a large model and it could be assembled 'without the use of tweezers'. (Inside joke!) It is also a beautiful model that will impress just from its sheer size. Should you decide to go to town detailing this beastie you will have a real show stopper on your hands. Elected to go with a hybrid scheme from the kit supplied markings. I was somewhat surprised by the cost of the kit. While the cost is three figures (I thought it would be more expensive), you get a lot of plastic for your money and an excellent opportunity to turn an easy to assemble kit into an award-winning F-86 model.

Besides, if you elect to leave the operating features in place you can drop the flaps, take off, retract the gear and 'fly' this F-86 around the house shooting down every MiG you can find, just don't forget the jet engine and machine gun sound effects....

My appreciation to HobbyBoss and IPMS/USA for the review copy.