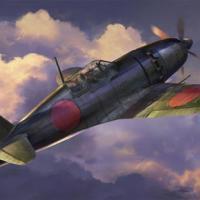 The J2M Raiden (Allied code name Jack) was designed by Jiro Horikoshi (of A6M Zero fame) and built by Mitsubishi for the Imperial Japanese Navy as a land-based point interceptor. It was designed to counter high altitude bombers. It relied more upon speed, climb-rate, and armament over maneuverability to perform this task. Initial production aircraft suffered from numerous problems with its Mitsubishi Kasei 13 engine, which in turn delayed production until solutions were found. The Kasei 13 was eventually replaced with the Kasei 23a engine on J2M2 and J2M3 production aircraft. The J2M5 Type 33 aircraft, represented by the model under review here, featured an enlarged cockpit and canopy and a Kasei 26 supercharged engine, giving this variant more speed at high altitudes with a consequent lowering of effective range. The J2M Raiden was the preferred bomber destroyer of IJN pilots late in the war, but due to its technical development problems the aircraft series did not see large scale production, a total of only approximately 500 being produced from 1942 to the end of the war.

Hasegawa’s J2M5 kit is one of a series of J2M kits produced by the company in 1/32nd scale. The parts contained in the all-plastic kit are very well molded with finely engraved panel lines on the fuselage and wing exterior surfaces. I did encounter a few ejection pin marks here and there on part surfaces that needed a little attention with putty and sanding stick. I also found a few sink marks here and there.

Construction begins with the nicely detailed cockpit. Color notes are called out using the Gunze acrylic or lacquer ranges of paints. I utilize the latter myself, so this caused me no difficulties, and I highly recommend them. All the parts for the cockpit have fine details, and the fit is excellent. The front instrument panel, part G5, has raised detail for the instrument clusters, which can be carefully hand painted by the modeler, or you can utilize the decals that are supplied in the kit. I chose the latter, and by paying careful attention to alignment, these fit precisely right over the raised details, so I got the best of both worlds. The kit comes with a nicely detailed 7 part pilot figure, with the choice of two different heads. The cockpit seat is minus harness detail, but there are numerous aftermarket options for this, and I happened to have on hand a set of Eduard pre-colored belts which did the trick nicely. Once the cockpit “tub” is completed, it sandwiches between the two large fuselage halves. Make sure prior to gluing the fuselages halves together you carefully test fit the tub into its space to get things aligned nicely.

Next in the construction phase comes the wings. Hasegawa’s approach is to provide the modeler with two upper wing halves, and one large lower wing unit. Sandwiched between these three parts is a five-piece wing spar set up to help align the wings. Hasegawa’s wings do not have separate positionable wing flaps. During the construction of the wings, the instructions indicate that the modeler needs to choose between two different wing armament layouts (20mm vs. 30mm cannon). Call me stupid (and some do) but I didn’t find these instructions the most informative, and I highly suggest the modeler find some good head on photos of the wings to check on exactly what the wing armament looks like before carving up the wing parts. Note that Hasegawa states in their instructions that the wing armament is deflected upwards at a 4 degree incline.

This is a seven part unit, with four separate prop blades. Each blade has a sink mark at its base which needs careful removal.

Section 10, and here we have the issue of dealing with a complaint leveled against Hasegawa in its attempts to provide multiple variants of a given airplane from a common set of molds. The cowl armament was deleted from the J2M5 compared to the J2M3. Hasegawa includes the cowl which was obviously produced for the J2M3 kit (as it has the armament openings), and asks the modeler to glue in a couple of “plugs” and fill the gaps that exist due to the poor fit of the plugs with filler and sand the area smooth. This inevitably leads to destruction of molded detail, which has to be “restored”.

The engine in this kit consists of seven individual parts, with good detail. There were some prominent mold lines on various parts that will need removing, but nothing taxing. Getting the engine to sit inside the cowl in the correct position took a bit of work, trimming, test fitting, trimming a bit more, but in the end everything appeared to work out nicely.

Hasegawa provides a multi-piece canopy, allowing the modeler to build the canopy in the open position, or buttoned up. The difference is in the rear part and starboard parts, and the open and closed parts look almost identical, so be careful to choose the correct ones. The parts are very nicely molded, distortion free, and commendably thin. The fit is good too.

Hasegawa provides the modeler with two color and marking/decal options. It isn’t really made clear (at least to me) if both versions have the same armament layout, as Hasegawa uses the same color and marking wing diagrams for both options. And the side profiles, which are different, are minus the armament. Both options are from the Chushi Naval Flying Group, Shanghai, August 1945.

I primed the model exterior with Gunze Sangyo “Mr Surfacer 1200”, then painted the model exterior silver, utilizing Floquil’s “Old Silver”. This was then allowed to dry for a couple of days. I wanted to show an aircraft with paint adhesion problems, which from the reference photos I found, was a common problem for the J2M Raiden, at least late-war. I tried three different “chipping” techniques at the same time. For the propeller, I utilized liquid mask dabbed here and there. For the cowl, I utilized the hair spray technique, spraying the product directly from the can onto the cowl. For the rest of the upper surfaces, I sprayed hairspray into my airbrush cup, and then airbrushed it onto the model. The results were as follows: using the liquid mask, I found it hard to get a “random” pattern, so I won’t use this method again. Spraying hairspray directly from the can onto the cowl resulted in fine spray all the way up to large “blobs” landing on the model surface. Thus when it came time to scrub off the paint, I ended up with huge chips and tiny chips and everything in between. Utilizing the hairspray out of the airbrush resulted in a much more easily controlled situation, both in its application, and when it came time to scrub the surface to produce the chipping. See the accompanying photos of the finished model to see the differences with the chipping: propeller/spinner, cowling, wings/fuselage. For the color paint, I utilized Tamiya XF-11 J.N. Green for the upper surfaces toned down with some white, and Gunze’s Mr. Color 35 IJN (Mitsubishi) Gray, each thinned with Mr Self Leveling lacquer thinner. The wing leading edge yellow areas were masked and sprayed Gunze 58 Orange Yellow. The model was then over coated with Tamiya X-20 Gloss Clear, prior to the decal application.

The decals themselves are well printed, with good color saturation, and performed well with Gunze’s Mr Mark Setter and Mr. Mark Softer decal solutions. For those that went over panel lines, after letting the decals adhere to the model for about six hours, I then took a sharp scalpel blade and dragged the blade down the panel lines, thus slicing the decals. I then applied more setting solution, thus helping to delineate the panels better. After leaving the model to sit for two days, the decals were sealed with more Tamiya X-20 Clear Gloss. Panel line washes were applied utilizing appropriate oil paint colors. Once the oil paint washes were given a week to dry thoroughly, I over-sprayed the entire model with Gunze Mr. Color matt clear.

Hasegawa’s J2M5 model is a real gem, with highly detailed plastic parts that fit together very well. The kit has a relatively low parts count compared to many similar models on the market, yet this in no way detracts from the detail provided, and certainly helps with getting the model built! I am extremely pleased with the way the kit turned out, and recommend it without reservations to any modeler with a few 1/32nd aircraft models under their belt. I wish to offer my sincere thanks to Hobbico/HasegawaUSA for providing the review model to the IPMS USA Reviewer Corps.