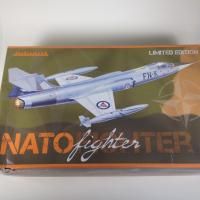 Eduard’s NATO Fighter is a limited edition boxing of the Hasegawa F-104G with the addition of resin parts for two different ejection seats and several sensors/antennas, a photoetch fret of details for the two seats, as well as a full cockpit, and 2 decal sheets – one of stencils and one with markings for five different NATO air forces that flew the F-104.

Hasegawa’s F-104 kit has been reviewed several times in the past, so other than a few gotcha’s that I learned the hard way, I will focus on the added parts and details.

I build 1/72 scale models most often and I have gotten in the habit of installing my instrument panels at the end of the build as this allows me to keep from getting paint or sanding dust on them. I assumed, incorrectly it turns out, that I could do the same with this kit – boy was I wrong. The photo-etch fret added by Eduard includes a beautiful instrument panel with lots of small handles for things like engine fire-extinguishers, canopy opening, and a nice HUD. Following the instructions I painted and assembled the front instrument panel and the instrument panel coaming (I did deviate on color for the coaming as the instructions say to paint it khaki green, but almost every coaming I have seen is (or started out) black.

I set this assembly aside while I worked on the rest of the cockpit, installing the photo-etch side consoles and rudder pedals. I want to complement Eduard for the superb detail it has added here as the rudder pedals even have “Lockheed” embossed on them! Too bad they are completely invisible once the cockpit is assembled – but I know they are there. While building the cockpit you have to make a decision as to which of the 5 aircraft that are covered by the decals you are going to build, as one of the 5 has a different ejection seat installed, so the seat rails that you install will be different. Both sets of rails are provided as resin pieces and with a couple of added photo-etch pieces. Fortunately, I did not install the control stick as instructed by the instructions, figuring it would be best to add this later in the build.

As this is the first time I have built Hasegawa’s 1/48 F-104, I want to complement them on the engineering of the wing attachment structure as they have designed the main gear well front and rear bulkheads to include slots for the attachment tabs of the wings to slide into, fixing the wing angle to capture the F-104’s look perfectly. Once assembled and detailed the cockpit is installed in the one fuselage half along with the gear wells and the exhaust cone. Before you close up the fuselage halves, I recommend you install the assembled instrument panel and coaming. It will be nearly impossible to do later on as the left lower corner of the instrument panel needs to be installed forward of the raised throttle quadrant and it will be much easier to do this before the fuselage is closed up. I recommend installing the cockpit in the left fuselage half, then fitting the instrument panel and the coaming followed by the right fuselage half, trapping the instrument panel where it belongs. I tried to snake the panel in at the end of the build and could not get it to fit until I took it almost completely apart, wedged the panel in then reattached the coaming and other parts I knocked off during assembly.

I also recommend sanding down both the inside of the fuselage at the exhaust as well as sanding down the appropriate exhaust nozzle as they fit very tightly, and I have heard of people splitting the bottom fuselage seam when they went to install the nozzle. Prior to closing up the fuselage, the instructions also instruct to drive holes in several spots on each side of the fuselage and installing small clear parts for lights. I elected to drill out the holes after painting and decaling and using Krystal Klear for the lights instead.

The fit of the kit parts was generally excellent and well-engineered as I only had a couple of spots where I had to do much filling – the usual intakes/fuselage and nose cone/fuselage joints being the primary ones. The instructions paint and install the photo-etch details for the canopy very early on. I skipped this step till after painting and decaling so that I could use the canopy to mask off the painted cockpit. The photo-etch is designed for the canopy to be open as it includes exposed canopy hooks on the right cockpit sill and a hinge for the left sill to hold the canopy open.

Eduard also provides several different antennas on a single resin sprue and which ones you use again depends on which markings you are using. For anyone using aftermarket decals, you will need to research the particular aircraft you are modelling to determine which antennas, engine nozzle and ejection seat is correct.

One other deviation from the instructions that I recommend is to not install the ventral strake until after decaling. I followed the instructions and installed it prior to painting, only to discover that the red stripe that goes on the aft fuselage is provided as a single decal to go completely around the fuselage, including under the strake! It would be much easier to simply install the strake after decaling is done rather than having to cut the decal in half and hoping everything stays lined up on both sides of the strake and on the fuselage. One disappointment in the kit is that there is absolutely no ordinance or weapons included, just the mandatory wingtip tanks and the small centerline pylon. It would have been great to find some wing pylons and some of Brassin’s excellent weapons in the set as the F-104 was a workhorse for many air forces.

With respect to the wing tanks, the kit includes the filler caps as separate parts and care must be exercised when installing them as the tops of the caps are actually curved to match the contours of the tanks. Also the fit is very tight and it would be a good idea to gently sand down the edges of the caps before installation to ease the fit. I did not and one of the caps was slightly too large and split the seam on the bottom of one tank. Also pay careful attention to the orientation of the horizontal fins on the wing tanks – the larger fin goes on the inboard side of the tank and the smallest fin in on the outboard side. The instructions also direct you to drill small holes in each tank and to install small clear parts for lights on the outboard side of each tank. Again, I elected to drill out the holes post painting and filled them with Krystal Klear.

One of the big additions to the kit are two options for the ejection seat – the Lockheed C-2 seat and the Martin Baker MK.7 seat. Again which to use depends on what aircraft you are modeling. I had chosen the Dutch F-104, so I used the Lockheed seat, but still had to choose which of the two seat pans provided. Since I could not find any photos showing the seat pans, I simply picked one and installed it. The resin sets are extremely well detailed and paint up great. The photo-etch set also includes full harnesses for each seat along with ejection handles and other details. Once assembled the seat look stunning. I now have a spare MK.7 seat that I will have to find a home for!

Eduard also includes a mask set for the canopy and it fits beautifully. I used the extra tape around the masks to fill in the blank spots.

The decals are printed by Cartograf and work wonderful with Micro Sol and Micro Set. As the there are probably over 200 stencils on the stencil decal sheet, be prepared to spend several days on decaling this kit! I spread my decaling sessions over 4 days, focusing on a different part of the aircraft each time. Eduard provides a wonderful illustration of where each of the decals go by providing top, bottom, left and right views of the aircraft. I made photocopies of each of the decaling pages and kept track of what I had applied by checking off the decals with a pencil on the decal sheet as I applied them. I did note two errors on the decal instructions. The first it they include a beautiful decal for the underwing pylons of the F-104, but there is no such pylon in the kit and second the labels of the wingtip tanks are reversed on both pages. The stencils for the side of the tanks should be facing outboard, not inboard on the side views and as discussed above, the large fin points inboard, not outboard on each tank in the overhead view.

This was a very enjoyable build and Eduard’s additional parts and decals really add a lot to the kit. I now have a very happy F-104 grinning at me from my office display case.

Highly recommended! Thank you to Eduard for the review copy and to IPMS-USA for letting me review it.