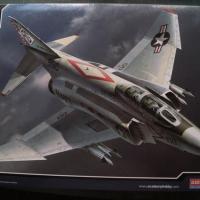 This subject needs no introduction or prolonged history so I’ll skip it. The kit has been around for a few years in various versions, this time as the short nosed F-4J of the U.S. Navy’s VF 102 aka the “Diamondbacks”. Having read a lot of great things about this kit I had high expectations and they were all realized when I opened the box. There’s a whole lot of plastic in there and it’s done to the highest standards. Most important is the one piece upper fuselage that eliminates the tricky gap you’d have otherwise. In fact a closer examination shows that most of the major joint lines fall in places that exist on the real thing making the builders job one of aligning the parts and gluing them. You get a full complement of missiles, iron bombs and drop tanks. The only negative out of the box are some faint mold seams on the canopy parts. Add to that a massive decal sheet with every (and I mean every!) stencil carried on this Navy bird, and you have a complete package.

So how many times have you been given beautifully cast parts only to have the process go awry when the construction starts? Rest assured that’s not the case here. The fit and finish are excellent with some minor exceptions that could have been self-induced. The instructions have you attach the built up cockpit and nose gear well to the lower half of the forward fuselage. When the time came to bring the upper and lower parts together, the fit seemed to require more pressure than it should have. I would glue the cockpit to the upper half first. While we’re on the subject of the nose gear, make sure you install the nose gear up lock (part #F48) so it faces away from the open gear door. I was also baffled by the main gear well boxes and how they interfaced with the main gear legs. As it turns out, you have no choice but to install the main gear legs with the box outs because they form a corner of those assemblies. The cockpits are well appointed but you’ll need seat harnesses if you don’t use the pilot figures provided. The rest of the airframe came together quickly and with some careful alignment before gluing, you won’t need any putty.

The decal sheet offers two versions of the same aircraft serial number as it appeared in the mid-1970s. The main difference is grey colored walkways verses just an outline. Painting is easy, consisting of overall white with light gull grey upper surfaces. The exhaust cans and the surrounding area are ripe for some metallic finishes and heat staining. For this project I tried a new brand of acrylic paints from Mission Models. All of the exterior paints used including the primer and metallic colors are Mission Models products. I really liked the results. I had some issues with lifting when I masked over the white and gull grey. I think that was more a preparation issue then the paint. The metallic colors worked really well. Some of the Mission paints require thinner to make the paint cure. Read the manufactures instructions before use and you shouldn’t have any issues. The colors dry flat so you will need to overcoat with gloss clear for decaling.

Prepare yourself for several sessions of decal application, this project is covered with them. The decals are perfectly printed and respond well to setting solution. Academy has provided all the markings so you really only need white, light gull grey and red to paint the airframe. You don’t need to paint the rudder white as it shows through the decal. The only issue I had was the leading edge “no step” decals didn’t fit as shown on the decal diagram. The easy solution is to cut them into smaller sections. Also make sure you press them down as I had a few shift position before they dried. Finishing details are simplified by Academy. The wheels and tires are separate parts and the canopy frames are prominent so they are easy to mask.

I think it’s safe to say most aircraft modelers out there have done one or more Phantoms. Personally, I have built the Monogram, Revell, Hasegawa and old ESCI kits. Academy eclipses them all. The quality of the engineering and more than reasonable price point, make it possible to put a few of these on your shelf. Now that I have the build sequence down, I’m picturing a USAF, F-4D with a gun pod. If you have any interest in F-4s, you need to experience this kit. Highly recommended! Thank you to MRC, Academy for providing the sample and IPMS for sending it my way.