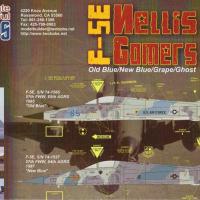 The squadrons deployed throughout US and overseas to teach adversarial tactics and provide dissimilar air combat training to US Air Force flying units from October 1972 to June 1990. The units currently operate F-16C and F-15C aircraft in similar roles, as part of the regular Red Flag cadre at Nellis AFB, NV.

US Air Force F-5E’s saw “Gomer” duty from 1975 until 1990 as noted at Nellis, and also with the 527th Aggressor Squadron at Alconbury RAF in the UK and the 26th Aggressor Squadron at Clark Air Base in the Philippines. Upon USAF upgrading its Aggressor units to F-16’s in 1989, some of the USAF F-5E’s found their way to the US Marine Corps to replace their F-21s. The U.S. Navy used the F-5E extensively at the Naval Fighter Weapons School (TOPGUN) and with other active and reserve squadrons providing for Dissimilar Air Combat Training (DACT).

Sample decals were applied to a refurbished Esci F-5E originally built 27 years ago, recently stripped and refinished for this review. An old favorite, with Dullcote long since yellowed, again shines like new and has a place of honor and distinction in my collection.

It goes without saying…or at least it should…that these decals get my highest recommendation for any modeler wishing to build an accurate Blue or Ghost scheme Nellis Gomer F-5E. The markings are so good and the schemes so colorful, why stop at one…why not build all five? Very tempting!

Thanks to Twobobs for the sample and the opportunity to build an eye-popping Nellis Gomer!