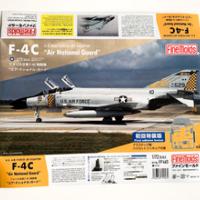 Way back in the 1960’s, McDonnell Aircraft had a winner with their F-4B Phantom II and it enjoyed a long production run in several versions. The plastic model manufacturers kept pace releasing and re-releasing many of these versions. Fine Molds is the latest modeling company to offer a line of F-4’s including several JASDF machines as well as the F-4E, F-4D, and F-4J. The F-4C is one of their latest releases and it is a winner.

Molded in light gray plastic, there are 13 runners of over 150 parts including clear parts for the optional open or closed canopies. The upper aft fuselage is in a separate bag. Fine surface detail is evident throughout. A very large decal sheet covers three Air National Guard fighters: two with the Michigan guard and one from the Oregon guard. All are in ADC gray schemes. Following the 24 pages in the instruction booklet, you’ll go through 37 steps shown in exploded views to complete the model. Also included here is a Color Reference chart printed in Japanese, but shows the names of the colors in English. It’s not too hard to determine which paint company is used by looking at the product labels on the chart: Tamiya (X, XF) and Gunze Sangyo (H-acrylic, N-lacquer). Decal placement is depicted on 8 pages for all three aircraft. As a bonus, the kit includes two nicely molded crew figures with their own 4” X 6” instruction sheet.

The kit’s engineering is well thought out for ease of construction and painting. The parts break-down portends future versions. The entire metallic-colored exhaust area is a separate piece, so the only masking needed is the small triangular area above the exhaust pipes. Fit is generally excellent with three exceptions which I will get to later (HINT: they are probably my own fault).

The build sequence is typical: starts with the cockpit and nose area which includes the intake trunks all the way to the engines’ compressor blades. I made the seat belts and harnesses for the ejection seats from masking tape. Parts assemble along the model’s panel lines so extra filling is kept to a minimum. I did use a bit of filler on the lower fuselage/wing joint and the lower radome. Wings and lower fuselage are next with the outer wing sections separate. Large tabs on these sections assures the correct dihedral. The same goes for the “not-so-horizontal” stabilizers which have long, interlocking tabs to provide the correct anhedral.

There is nice detail in the wheel wells, on the landing gear, and on the gear doors. The inner doors include a section of the wheel well wall which neatly sets their angle. I did have to trim the long stubs on the small outer doors (A54, A55) to get them in place. One caution with the gear: the main struts have a “ramp” for their base that slides into place between the upper and lower surfaces of the wing. I gently pushed them into place with a small flat head screw driver.

Fine Molds only provides three fuel tanks as external stores. The F-4C didn’t usually carry the center line tank, though. The modeler can purchase missiles and bombs, as well as other detail parts, in separate “Detail-Up Parts.” I have a supply of Sidewinders and Sparrows in my spares box, but I chose not to add any to my model.

Painting the model is pretty simple. After a layer of Alclad’s Grey Primer/Filler, I used Tamiya’s Flat White for the interior of the wheel wells, gear doors, struts, and wheels. Tires are Tamiya’s XF-63 German Grey dry brushed with some Rubber Black. I sprayed Gunze’s

H57 Aircraft Grey as a base for the ADC gray with a little contrast from H61 IJN Grey. With that done, I sprayed a couple of thin coats of Tamiya’s Clear X-22 in preparation for the decals.

Decals are also excellent albeit on the thick side. The sheet itself is very crowded with tons of stencils. Fine Molds chose to combine stencils near each other into one larger decal. As a result, there is a lot of clear backing between the individual stencils which increases the threat of silvering. I did have some and applied Microset and Microsol with mixed results. One more coat of gloss would probably have helped. In some cases, I cut the individual stencils away from each other thus eliminating the connecting clear backing. Be prepared to spend a lot of time applying decals.

Since the Michigan aircraft were participants in the William Tell Gunnery Meets, their crew chiefs kept them quite clean. Consequently, I did hardly any weathering.

As I previously mentioned, I had a couple of fit issues. First was the one-piece exhaust section of the fuselage. On my model, the width of the vertical seam line with the main fuselage under the vertical stabilizer was out of scale so I sanded the leading edges of A20 and A21 to get a tighter fit. I chose the closed canopy option. The windscreen didn’t quite meld with the main canopy resulting in a small gap between them. Also, the main canopy didn’t settle into the rear fuselage slots smoothly. If you chose to open the canopies, you shouldn’t have this issue. Finally, there was a small gap between the radome and the fuselage forward of the nose gear well. These are relatively minor nits which I most likely contributed to. I did purchase the Fine Molds F-4J which has the same parts break-down, so I’ll be more attentive to those areas on that kit.

Fine Molds kits are not readily available from most US hobby suppliers, but can be purchased on eBay. The eBay kits ship from China or Japan and are relatively expensive. A couple of the Japanese hobby websites carry these kits at a very reasonable price (low $30’s), however, the shipping costs are around $20 or more. This bring the cost almost up to the eBay range. I ordered my F-4J via the latter and it was delivered in about two weeks.

This is an excellent model in every way and I enjoyed the build. It’s the best 1/72 F-4C on the market in my opinion and I highly recommend it. Take your time and look at those areas I mentioned and you will be rewarded with a great looking model. Get one when you can.

My thanks to Fine Molds and IPMS USA for the opportunity to review this kit.