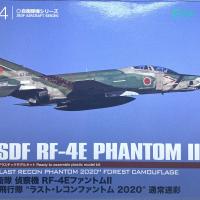 It had to end eventually. After nearly a 40-year run in the Japanese Air Self Defense Force’s (JASDF) venerable Phantoms were finally retired in 2020. Several model companies re-released their RF-4 / F-4 kits to commemorate the myriad of markings worn by these Phinal Phantoms at the end of their JASDF careers. Platz was no exception and one such release included the RF-4E Recce Phantom with the forest camouflage. Markings for 3 different machines in the squadron were included in the kit.

The cockpit is first on up the plate and with the size of the kit, the pilot’s office is represented reasonably well. With the ‘pit compete, its time to bring the fuselage halves together along with the air intakes and wing. The plans have you place the air intakes on first and then the wing. A trial fit revealed to me that the fit was just a touch fiddley and I decided to put the wing in place (without glue) and then fit the intakes. This helped get a good alignment on the finished model.

I next fitted the wing and it should be mentioned, parts are included for depicting the model with the gear up. The tail cones and canopy are fitted and pretty much it is time to paint the model. On my example the canopy seems to fit reasonably well, but there is a small gap on either side of the canopy. The gear and stabs were left off to facilitate masking the fuselage / wings for the camouflage pattern.

After paint and the clear coat, I applied the decals. Decals are by Cartograph and went on VERY WELL. However, it should be noted the drop tanks are supposed to be covered in a single decal each that wraps around the tanks. Since I suspected this would be problematic, I painted the drop tanks the same color as the decals and simply cut off the “film design” from the drop tank decals and applied that part only. This worked really well and I was happy with the results. Next was the clear matt finish and the gear, pitot, drop tanks and rails were added. Completing the model.

Final judgement, this is a decent little kit and with a little effort would make a great little weekend project. J Although, the multicolor camouflage and its masking might slow you up a little. I would really like to thank Platz Hobby for providing this great kit to the IPMS USA review corps, and to the IPMS for allowing me to review it.