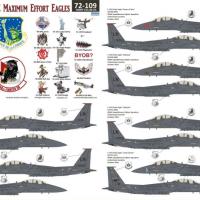 Between April to October of 2018, several F-15Es from the 494th Expeditionary Fighter Squadron (the "Panthers") deployed to an undisclosed location in the Middle East to support Coalition Joint Task Force Operation Inherent Resolve, tasked with striking Islamic State targets in Iraq and Syria. While deployed, the Panthers completed nearly 2,000 missions, over 10,000 flying hours, employing more than 500 precision-guided munitions in support of US Central Command operations. On their return to Lakenheath at the end of the deployment, the aircraft were seen sporting some very striking nose art and mission markings.

Since 2001, TwoBobs decals has built up a reputation for high-quality, well-researched and detailed decal sheets with a focus on modern US aircraft. This decal sheet focuses on some of the more prominent Panthers from the OIR deployment.

The airframes on this sheet are:

It’s not known whether any of these airframes were involved in the mysterious Memorial Day mission over Africa in 2015, and if you were able to determine if they were, they might not have had the nose art or mission markings on them.

The decals, which are printed on a roughly 5" x 7" sheet with an additional 2" x 4" sheet of stencils, are in sharp register, colorful, very little carrier film visible, as per usual with modern decals. Included are enough stencils for two additional aircraft, though pay attention to which aircraft you’re modeling as two pairs of the tail codes have the white shadow on them. Also note that there is one additional decal specific to 00-3001, below the port canopy frame. This is noted on the instruction sheet, which is printed on high-quality, glossy paper. You’ll also want to check your photo references, as some of these airframes have parts cannibalized from different airframes (the one I did, 91-0329/LN "Deadpool" had a port tail rudder cannibalized from an F-15C, thus the different color).

The sheet does include notes for a typical loadout, but nothing specific to any missions flown in-theater. I did some research and found a video of one with GBU-38s on stations 8, 9, and 10 on the portside long lower pylon, and a GBU-39 rack on station 11 of the long lower pylon, drop tanks on both stations 3 and 4, with AMRAAMs and AIM-9X on the missile rails, so that would be the loadout intended to model mine on.

There are a few things you’ll need to look out for when using this sheet. The sheet contains two sets of stencils, but not all of the stencils on the airframe – just the more visible ones. As I used the Academy kit, there were additional stencils, such as the ones located on the CFTs, there were not on this sheet. Research variances also tended to result in different sized stencils. I noticed that the kit stencils were differently sized than those on the review sheet. Given that TwoBobs has greater access to these airframes, I would lean towards the aftermarket sheet sizing as more accurate. Finally, be very careful when using the NO STEP/NO PUSH stencils. The decals are printed very close together, and after having spent hours on the decals I had failed to notice the differences until I realized I accidentally used some of the NO PUSH ones on the wings. Fortunately, the decals were really thin and I was able to sand them off gently with a wet, fine grit sanding stick. This is not a criticism of the sheet, but more of a warning to pay attention. Maybe adding a bit of space or a divider line to differentiate the markings might be helpful. Other than those issues, the last of which was my fault entirely, the decals went on flawlessly. Carrier film was very thin, and after an application of Solvaset, disappeared into the gloss base I had prepared for the decals.

The Lakenheath Eagles are the best-equipped Strike Eagles in the USAF inventory, so TwoBobs recommends the Great Wall Hobbies kit (L7201), and the Hasegawa kit (though there are several variations of this kit – look for 01569 or E39, which contain the corrected conformal fuel tanks and pylons). While not mentioned on the sheet, I would also suggest Academy 12550, which is a fantastic kit but lacks an opening canopy and a very poor rendition of the PW F100 engine nozzles (though Aires makes an excellent replacement set (7352, and pictured on the model). I ended up using the Academy kit, retained three of the JDAMS on the port side and used an SDB rack from the Kinetic F-16D kit.

With a wide selection of airframes and excellent attention to detail, I would highly recommend this sheet to dress up an otherwise drab Eagle. For those of you who build in larger scales, this sheet is also available in 1/48 and 1/32. Thank you to TwoBobs for the review sample.

Finished model with decals
Previous Next