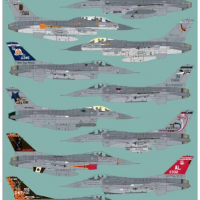 Speed Graphics is that sub-part of Reid Air products which have focused (initially) on Modern Fighters, particularly USAF and some export birds. Their line-up is impressive, filled with USAFE , PACAF, and Stateside Rhinos and Vipers… take a look. Thanks to Reid Air for sending IPMS USA this set, to Dave for the nod to move out on them, and Dick for bringing the sheet to the Nationals for me.

This release is a complex, well-researched product. Designed for Tamiya’s superlative-laden F-16 series, you can build from an early block 10 Viper all through the block 42. Invest heavily in the aggressor version, as you will need it to properly configure your jet, or you can go the resin route and have an AMS feast. Your budget limits the choice.

The instructions deserve copious praise here; each subject is researched and described well, to include facts such as which engine is used, along with augmentor petal arrangement, and which intake is appropriate. This is a VITAL part of the story and the decals are sized accordingly. Also, if you are building an ANG bird, you may or may not have full load on board. Aggressors have different equipment and, as a rule, do not carry munitions on their missions. Sensors, which are munition-shaped with different purpose, yes. Otherwise it’s a Wiffer if you hang Yellow-banded laser-guided or free-fall munitions on the jet. Blue bands, orange inert Sidewinder bodies, Etc. are all appropriate.

From their instruction sheet, here’s what you can produce; (there are sufficient stencils for two complete aircraft off the sheet if you use the Hill birds, or you can use the kit decals for the remainder of the stencils and build the entire set using the sheet and kits. IMPRESSIVE!)

This sheet in 1/48 features 11 F-16s with some sort of heritage artwork, whether the unit's anniversary, end of F-16 operations, or other celebration of the squadron's history. It is a mix of old school Vipers along with modern-day jets, all of which have never before been done in decal form.

The decals behaved in a manner becoming the industry norm. Dense, accurate color, thin, flexible, but easily manipulated on the model prior to settling down, the majority of the decal elements peformed flawlessly with the usual care being applied. On some schemes (such as the one I did from the Arizona ANG) you need to plan ahead and plan adding some parts after decaling doing the mix-to-match touch-up paint along the way.

I decided to do the Arizona guard tiger tail, and it came out “muy Bueno”… I used the ANG Tamiya F-16 Straight out of the box, and only had to add the BLOS (Beyond Line Of Sight) modification to the dorsal fin; to do this I painted the entire tail primer black automotive lacquer, and used a small snip of vinyl Insulation tape (Semi-clear white, used around window air conditioners.. good stuff, and aggressive in tackiness). After folding the section over the fin, I used a sharp #11 blade to cut at the required areas using the Speed Hunter instruction sheet to figure out where the outline was, then wicked thin superglue around the edge to ensure it did not come off. Most of these jets have this modification, which is required to use the “Slammer” (AMRAAM) missile system.

After application the decals settled down with no curling edges or floating off. Once again the pictures tell the story; this is an impressively researched effort; keep these guys in business, buy two!

I was able to talk with the Reid Air folks at the nationals, and they stated they have more coming… Great, more ways to kill my modeling budget. This is a fantastic set, and I look forward to seeing what is coming down the pike!

Extreme thanks to Reid air for sending the set to IPMS USA, and to the IPMS stash keepers Dave and Dick, for providing them to me.