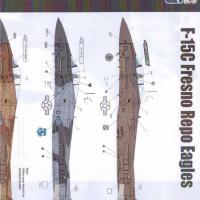 Designed to fulfill the US Air Force’s 1968 requirement for a lightweight air superiority fighter, the F-15 Eagle has arguably been the most successful and dominant air-to-air fighter since its entry into operational service in 1975. Even after over 40 years of exceptional performance and the emergence of the F-22 Raptor, the F-15 is expected to remain in service well into the 21st Century.

In recent years, F-15C’s have served as aggressor aircraft in dissimilar air combat training at Nellis AFB, NV. With size and performance comparable to Russian Su-27 Flanker aircraft, F-15’s painted in Russian color schemes and employing Russian combat tactics have been a familiar training foe for hundreds of allied pilots. Recently the 65th Aggressor squadron was inactivated, and its F-15 aircraft were transferred to various USAF Air National Guard (ANG) squadrons. One recipient unit was 144th Fighter Wing of the California ANG, replacing their F-16Cs. Several of these aircraft carried the aggressor paint scheme, which will be replaced by the traditional Mod Eagle scheme during the next scheduled depot maintenance cycle.

Although scaled for the Hasegawa kit, the sheet is well-suited for the Academy kit, as used for this review. Two Bobs provides markings for 3 aircraft – 2 aggressors and 1 Mod Eagle scheme – and 3 complete sets of stencils for the hardcore, rivet-counting Eagle lovers.

Quality of print (by Microscale) is superb, with true colors and ultra-fine detail discernable in the smallest of stencil data.

Piggybacking on another review item, I applied the decals to Academy’s F-15C MSIP II kit (link to kit review), rather than the prescribed Hasegawa kit.

From a technical standpoint, the decals applied and settled in using the Microscale System brilliantly. The thin film was easily blended with the sealing clear coat. Fit was near-perfect, with the exception of the inflight refueling receptacle (IFR) markings. I’m assuming Academy’s scaling of the kit IFR features was a bit more diminutive than those on the Hasegawa kit, and will thus extend a mulligan to Two Bobs on this one.

Painting and marking diagrams were complete and appeared accurate when compared to online photos of actual and similar subject aircraft.

Virtually flawless in application and eye-catching in overall presentation, the overall effect is absolutely stunning. I highly recommend this sheet for modelers wanting to model a colorful F-15C or to add to their 1/72 scale aggressor collections.

Thanks to Two Bobs Aviation Graphics for the review sample and to IPMS/USA for the opportunity to present this review.