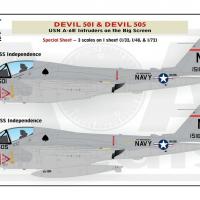 If you enjoyed the movie "Flight of the Intruder" that was released back in 1991 (and now I feel old), AOA Decals now provides you with the ability to replicate the aircraft flown by the Squadron Commanding Officer, or by the main character. Commander Frank "Dooke" Camparelli (as played by Danny Glover) along with Bombardier Navigator Lt. Carl "Hero" Aldana flew in Devil 501 while Lt. Jake "Cool Hand" Grafton (played by Brad Johnson) flew Devil 505 with BN Lt. Morgan "Morg" McPherson (played by Christopher Rich), and later LCDR Virgil "Tiger" Cole (played by Willem Dafoe). Although the movie was not critically acclaimed, and did not make enough at the box office to offset the production costs, it remains an interesting movie to some of us, and it has plenty of scenes starring the A-6 Intruder.

As the movie was set in 1971, the Intruders would have been of the A-6A variant, but for the filming, A-6E Intruders were modified to look like A models, most obviously by the removal of the TRAM turret under the radome. There were also some markings added, such as white paint on the topsides of the wings and stabilators, as well as on the rudder and the radome. There was also black added around the windscreen, high visibility markings added to the intakes and exhausts, and oversized national insignia, all of which are represented on this decal sheet. There are also optional decals included as the "505" appears different under the windscreen in some scenes, and decals are also provided for the helmets of Camparelli, Aldana, Grafton, and McPherson, as well as the canopy rail names and call signs.

In a single sheet measuring roughly 6 ¾ inches by 8 ¼ inches, AOA Decals provides the basic markings for either Devil 501 or Devil 505 in service with VA-196 Main Battery aboard the USS Independence in 1971 as depicted in the movie. Either you will need to use kit-supplied decals, or an aftermarket set for the stencils. The single color sheet for the directions show left side views of both Devil 501 and 505 along with topside and underside views of the planes and helmets for the pilots and BNs. There is also some information on the sheet describing the planes used for the movie, as well as some marking changes that occur between scenes. My suggestion would be to pick a scene that you like for the aircraft you are representing, and then freeze the scene to take some notes on the particulars for the plane at that time.

In closing, I would highly recommend this decal sheet to fans of "Flight of the Intruder" who want to represent one of the planes from the movie. The beauty is that you can be a fan of 1/72, 1/48, or 1/32 scale aircraft, and get what you need on this sheet.

I would like to thank AOA Decals for being gracious enough to provide this decal sheet to the IPMS-USA for review! I also like to thank Dave Morrissette for his time and efforts in running the Review Corps as well as allowing me to perform this assessment. I also appreciate the folks behind the scenes in the Review Corps who keep the review machine running so well, and finally my most sincere gratitude to all who take the time to read this.