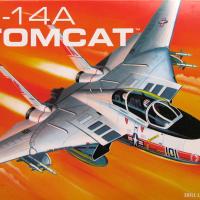 If you are interested in building some of the older kits that you may have missed when they were first introduced, you have a friend in Round 2 Models, who is re-releasing kits from the likes of AMT, MPC, and Polar Lights. One of their latest releases is the AMT F-14A Tomcat that includes vintage kit packaging and some nicely produced decals. The kit has parts included to add up to four Phoenix (AIM-54) missiles, two Sparrow (AIM-7) missiles, two Sidewinder (AIM-9) missiles, TARPS (Tactical Air Reconnaissance Pod System), and has the markings for two different early F-14A aircraft. The built-up kit is a respectable looking early F-14A Tomcat; just keep in mind that, being an older kit, there will be some fit issues to overcome, and there are some items not mentioned in the instructions.

If you have read some of my previous reviews, or you know me in person, you realize that I am a bit of a Tomcat fanatic. As I have written other reviews sharing the history of the Tomcat, I will provide some information on Navy Fighter Squadron 1 (VF-1), also known as “The Wolfpack”. Originally established on 1 July 1922 and operated for twelve years, the first VF-1 was redesignated as a bomber squadron (VB-2). On 1 July 1935, the squadron was reestablished, but this time for two years, at which time it was redesignated as VF-6. On 1 May 1943, the squadron was established for a third time, and served with distinction in the Pacific theater flying Grumman Hellcats, and was this time disestablished on 25 October 1945.

The markings in this kit represent an F-14A delivered to the squadron in 1973, which was established for its fourth time on 14 October 1972. Along with the Bounty Hunters of VF-2, these two squadrons received the first production F-14A aircraft and became the first operational Tomcat squadrons in the Navy, assigned to the USS Enterprise (CVN-65). The squadron flew CAP (Combat Air Patrol) missions during the evacuation of Saigon, and they recorded the only air-to-air Tomcat victory of Operation Desert Storm (an Iraqi Mil Mi-8 “Hip” helicopter). In addition to the USS Enterprise, the squadron as part of Air Wing 2 was also attached to the USS Ranger and USS Kitty Hawk. The end for the squadron came as their assigned carrier at the time (USS Ranger) was retired, and the Navy was cutting back from two F-14 squadrons per air wing to one. 1 October 1993 marked the end of the line for the Wolfpack.

Upon opening this kit, you will find six sprues molded in a smooth gray plastic holding ninety-three parts, a single clear sprue with the canopy and windscreen, a decal sheet, a full-color, double-sided page showing decal locations and colors, and a six-page instruction guide printed in black and white. The instruction sheet provides paint colors, but is not as inclusive as the ones on the color sheet. In addition, the underside of the box provides the parts overview, including a shot of the decal sheet.

As with most aircraft kits, construction begins with the cockpit, and decals are provided to represent the side panels as well as the instrument panels. One thing that I appreciate is that the instructions spell out what each item is during assembly, although there were a few mistakes that I found. Taking into consideration that this is an older kit, the level of detail is not bad, and is in some instances better than other offerings of the Tomcat in this scale. The Navy Bureau number for my plane (158979) represents the fortieth Tomcat produced, which was delivered on Halloween in 1973. Being a block 70 aircraft, it did not have a pitot tube on the nose (these were not added until block 75), and it was not equipped to carry the TARPS.

In building my Tomcat, I used Model Master Acryl Gloss Gull Gray, Semi-Gloss White, Aircraft Interior Black, Dark Gull Gray, Dark Gray (F-15), Insignia Yellow, and Radome Tan. Vallejo Natural Steel and Dark Rubber were also utilized, as were Testors Dark Red and Brown (in the small square-base bottles), Model Master Metalizer Burnt Metal, and Lifecolor Olive Drab. In my collection of all things F-14, I have a photograph issued by Grumman showing a Tomcat in VF-1 markings that I used for my paint scheme, as it varies slightly from what is shown on the color sheet included in the kit.

Before I get into my hits and misses, I will simply state that this is a reasonably good kit that was fun to build, does not have an over-abundance of parts, and, once completed, provides the builder with a good representation of an early A-model Tomcat. I have previously built Tomcats offered by Hasegawa, Fujimi, and Hobby Boss in this scale, and there are kits in my stash from the aforementioned companies, as well as offerings from Italeri, Heller, Hobby Craft, Revell Germany, and even one by Zhengdefu. My point here is that this is not a good choice if picking a kit to build up for a competition, as the level of detail and some of the fits would require far too much work to correct, but for some fun modeling at a good price, it certainly fits the bill.

As far as my hits of this kit are concerned, I have to say that the assembly was mostly easy, and the instructions are for the most part easy to follow. Many of the panel lines are finely recessed, and the well-produced decals presented no issues during application, as they lifted easily from the backing paper and worked well with Micro Set and Micro Sol. A modeler with relatively little experience can produce a respectable looking Tomcat using this kit, as some manufacturers offer what can be an overwhelming number of individual parts.

Early in my construction, I contacted the folks at Round 2 with some discrepancies that I found before I even started. This mostly dealt with parts that were improperly named in the instructions, as well as an entire sprue of parts not being mentioned (Sprue D, which has the Phoenix missile halves and launch rails). I am hoping at some point that they make some corrections based upon my input, but as my document was two pages in length, I am not going to cover all of it here.

Therefore, as far as my misses are concerned, there is some flash present on most of the parts, and items like the main wheel halves and exhaust nozzles required the use of a file to clean mold plugs. The interior colors mentioned are incorrect, so refer to photos of the real thing, or take my advice and use Dark Gull Gray (FS 36231) for everything. Although step 10 says “external fuel tank (2X)”, the parts and drawings show the single TARPS, and in step 14, the Starboard Ventral Fin is part 8E (not 9E, which is shown as both the port and starboard fins). As mentioned above, the sprue with the Phoenix missiles and rails is omitted completely. The canopy does not fit well, so I would suggest displaying it in the open position to hide this. The red used on the decals appears a bit dark compared to photos of the real plane, and to match the color to paint the tops of the tails I mixed 12 parts Testors Dark Red and four parts Brown (both are ¼ ounce enamel paints), which by skill or luck, came out close to the decal red. The color sheet for the markings shows the exhausts for an A+/B/D Tomcat, not the original A, so the inboard section should be a steel color with the exhaust nozzles being a burnt or dark metal color.

In conclusion, I would recommend this kit to less experienced modelers who would like to add a 1/72 scale, early F-14A Tomcat to their collection. The kit can be built with relative ease, and the part count will not overwhelm those who find a high number of parts intimidating. I will also mention that if you are appreciative of nostalgia, this will be a great kit for you.

My thanks go to the folks at Round 2 Models for providing this kit to IPMS-USA for review, to Steve Collins who runs the Review Corps and allowed me to appraise this kit, and to you for taking the time to read my comments.

Shims added prior to installing fuselage