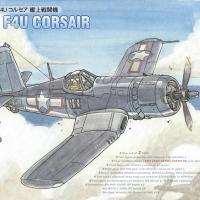 I've made several of attempts to model a Corsair without much success. I either got bored with the build, frustrated with the fit and moved onto something else, or just didn't find a kit that suit my modeling style. I even resorted to conning a fellow club member into doing a buddy-build with dubious success. Mine not theirs.

All of those machinations have fallen short of adding a Vought Corsair model to my collection, until now. When I first saw that AFV Club was releasing a 1/144th scale Corsair I was every excited. This diminutive size is my preferred scale for modeling aircraft and until now there really hasn't been a descent kit available. While excited to get my hands on this kit there was a still bit of trepidation.

AFV Club has done a series of 1/144th scale P-40's and I found those kit somewhat lacking. Little in the way of interior detail was provided, few markings options, and very little external detail (bombs, drop tanks, etc.) was available with those P-40 kits. [In AFV Club's defense, those deficiencies are not uncommon to kits in this scale.] AFV Club has answered all those concerns in one fell swoop...or maybe, two fell swoops as there are two complete kits in the box.

What's inside the box are three sprues of dark blue styrene with the larger one holding part for the fuselage, wings, engine, cowl flap rings (open or closed), two styles of props, gun or cannon armament, and separate wing flaps. The two smaller sprues have all the bits for the under-carriage (in-flight or parked), interior detail, and under-wing stores (rockets, bombs, and two styles of drop tanks). A nice feature of the undercarriage is that MiniArt provides two types of tail wheel, extended or retracted. The more you look the better this kit gets.

The is a small sprue of clear styrene with the three different style of canopy (birdcage, or bubble-top) utilized by the Corsair during it's operational career. For the thorough reader, the two bubble-top style canopy included in this kit are for either the F4U-1 or F4U-C.

The markings options will allow you to model any of eight different Corsairs, even a 'Kiwi' Corsair( F4U-1A) stationed on Guadalcanal in 1945 or an F4U-1 of the Royal Navy assigned to Quonset Point in July 1943. The other marking options are:

The assembly instructions are laid out nicely and the parts go together with out much muss or fuss. There is a snap-buildable© quality to the kit which kinda gets in the way of assembly but some judicious snipping of attachment points solved all the issues I had. The fuselage is first. You will need to be some minor surgery behind the main cockpit if you wish to model an F4U-1 but the outline for that is laid out on the interior of the two fuselage bits. One item that I must applaud AFV Club for is the fit of the various canopy. The canopies on most 1/144th scale aircraft don't fit for diddly-squat. AFV Club must have had that in mind as all of the examples in my review cockpit fit like a glove. Merci beaucoup!

The mounting holes for the variety of under-wing armaments will need to be drilled out before you assemble the wings. The main wing flaps are provided as separate pieces and a clever person could use some of their modeling skills to drop those flaps. As mentioned earlier, you have the choice of either guns or cannon for wing armament with some nicely detailed, separate parts for the distinctive radiator inlets common to the Corsair. You also have the option of two styles of three-bladed propellers (depending on which mark your building) as well as retracted or extended landing gear. The landing gear doors, particularly the forward gear bay doors, are bit on the thick side and would benefit from some thinning.

Underwings store consist of a 1000lb. bomb, one 175 US gallon center-line drop tank, two 150 US gallon drop tanks, four 250lb. bombs, and eight 5-inch high velocity rockets. The Corsair could carry two 1000lb. bombs so if you want to depict yours that way you'll need to scavenge another bomb from the other kit. While AFV Club does provide plenty of marking options (eight) those markings are pretty basic, consisting of various national insignia, aircraft numbers, and appropriate fin flash for the particular variant you select. But in this scale anything else would probably be invisible to the naked eye. The decals laid down without any issues and are appropriately thin, snuggling down into all the nooks, crannies, and panel lines.

This 1/144th scale Vought Corsair kit from AFV Club is excellent and on par with any of the Sweet, Dragon, or Eduard small scale aircraft kits available. And if you prefer your Corsair with folded wings, AFV Club is soon to release that version, hopefully with a four-bladed prop.

With the small scale and the fact that these kits come two to a box, you wouldn't need that many to model a diorama of pilot's running to man their planes aboard a carrier. Figures sold separately!

My thanks to AFV Club and IPMS/USA for the review copy.