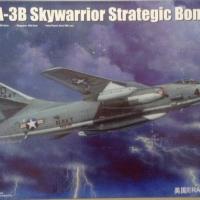 This is the third and final installment, “Full Build,” of Trumpeter’s Douglas ERA-3B 1/48th scale variant to be released by Trumpeter in 2016. The plane depicts the US Navy, VAQ-33 ‘Firebirds’, ERA-3B, 104/GD BuNo. 146447. The ERA-3B variant was converted from the RA-3B variant as an electronic aggressor aircraft serving with the VAQ-33 and VAQ-34.

This was a full model build straight out of the box with no aftermarket accessories added. The model was based upon the US Navy, VAQ-33 ‘Firebirds’ plane as seen on page 49 in the A-3 Skywarrior in Action Book, Jim Sullivan, Aircraft Number 148, Squadron/Signal Publications. Sullivan’s depiction of the picture states that this plane is sitting on the flight line at NAS Oceana Virginia on 12 May 1977.

In Part 2 of the build we constructed the interior and glued it to the fuselage. In joining the two fuselage halves I ran into some fit issues. With a little sanding of the bulkheads I was able to join the fuselage together. After this was allowed to dry I used Perfect Plastic Putty and glazing/spot putty along with sanding to ensure there were no visible seam lines.

Before Step 14 was started there were a few panel lines that needed rescribed. Some rivet holes needed to be added especially around the nose and on the upper surface of the fuselage. By using Dymo tape and a sewing needle chucked into a pin vise these were easily accomplished.

Step 14 consisted of adding the canopy, astrodome, nose Radome, glare shield, inflight refueling probe, tailcone chaff dispenser and parts F36 or F8 depending on whether the vertical stabilizer will be folded or not. I decided not to fold the stabilizer and to wait to attach the canopy until step 27 was complete. In addition, I decided to wait to attach the in-flight refueling probe until later on in the construction. Next came gluing the chaff hopper inside the tailcone halves. Placement on the plane did not show any fit issues. Here again this chaff hopper will not be shown. All that was required was a little sanding. Also clear part Y6 (Astrodome) will not be installed until the plane is painted.

Step 15 consisted of the constructing the external lower escape chute. The door consists of four plastic parts and one PE, since I will be showing the aircraft with this in the open position. A good reference for detailing the external lower escape chute including excellent pictures of the inner and external escape hatch is Bruce Cunningham’s book, Douglas A3D Skywarrior Part One Design/Structures/Testing. Simi Valley, California: Steve Ginter, 1998. Print. Also in this step is the construction of the tail gear bumper wheel undercarriage, tail hook, attaching the left and right main undercarriage wheels, taxi light (part Y4) and nose gear door. During the construction of the nose gear door the “carpet monsters” did their thing. The hinges which attach the door to the fuselage consists of three PE parts (PE27 & PE28). Due to the pesky carpet monsters I had to scratch build one of the hinges. Also is the attachment of the ECM canoe to the bottom of fuselage.

Steps 16 and 17 consist of building the left main wing and the right main wing. This model is built with the wings open so there are a few PE parts which were not used. I didn’t see any assembly problems here. The fit was very good.

Step 18 consisted of attaching the left and right main wings to the fuselage. Even with tedious sanding there still was a slight seam between the wings and the fuselage. This was a fit issue I did not foresee with Trumpeter. However, Perfect Plastic Putty took care of this problem.

Step 19 and 20 consist of the construction of the left and right horizontal stabilizers, the vertical stabilizer. Part F34 is used for folding so I did not use it. Another item to add to my stash, you never know when this might come in handy. Here again there were no fit issues.

Step 21 and 22 consist of construction of the left and right folding wings, outboard wing slats and ailerons. Here again there are PE parts which are not used if the wing is not folded. Trumpeter does give a concise list at the bottom of this page of these parts not used which is very handy. The wing navigation lights Parts Y2 and Y3 were left off until final painting is done.

Step 24 consisted of building the model with folding wings. Again I do not see how the small hinged PE parts are enough to hold the weight of the wing during the folding sequence.

Step 25 and 26 consist of building the two Pratt and Whitney J57 turbo-jet engines. There are five instructional steps that need to be built, because each one depends on the other. No shortening of the build process. Detail is very good. The final part H5 or H7 (nacelle access doors) could be left off to show the fine detail of the jet engines Trumpeter has molded.

Step 27. This step consisted of adding the jet engines, airbrakes, left and right main gear doors, lower blade antenna, left and right ram air turbines and airbrakes. Since I wanted to show the airbrakes shut, I had to remove the hinges before gluing Parts F16 and F18. Trumpeter designs this kit where the airbrakes are shown open. During the attachment of the jet engines the small tab on the upper surface of the engine needed to be trimmed in order for the engines to sit properly on the pylons.

Jet engines were given two coats of Vallejo Metal Color Burnt Iron 77.721. Ailerons and bottom of fuselage and wings were given three coats of Vallejo Model Color 70.842 Gloss White (the equivalent to Insignia White). Unfortunately, I found out too late that it would have been better to paint the engines off of the plane versus on the plane. Here my inexperience in model aircraft building came into play. Upper surfaces were painted with two coats of Model Master Acryl Flat Gull Grey FS 36440 (TES 4763). Nose painted with Vallejo Model Color 70.950 Flat Black. Plane was then given a coat of Model Master Acryl Clear Gloss. Panel lines were detailed with a mixture of Vallejo Model Color Gloss Black 70.861 and Model Color Burnt Umber 70.941.

After the paints were allowed to dry for twenty-four hours, decals were applied using Solvaset. They laid down beautifully and I did not see any silvering after they were allowed to dry and set. During the application of the decals I did noticed that Trumpeter only supplies two engine intake decals (“Jet Intake” #s 15 and 16”) one for each side. These additional warnings will have to be hand painted. Next came one application of Model Master Acryl Semi-Gloss Clear to seal everything.

This completes the Full Build of the Trumpeter ERA-3B Skywarrior. As a novice to aircraft building I was challenged all along the way. Even though I did experience many challenges mostly from my inexperience I really enjoyed building this kit. Unfortunately, there were a lot of components that will not be seen when the fuselage is closed up. To reiterate, good reference material is a must to refer to during the construction process. Additionally, Trumpeter’s attention to detail can readily be seen and the lack of flash, seam lines and ejector pin holes made this kit an enjoyable build.

I would recommend this model. As I wrote before, this kit is for the experienced builder or for the novice who enjoys a challenge to increase their building skills.

Thanks to IPMS/USA, Trumpeter and Stevens International for allowing me to review this aircraft kit.

They do not come in sets compeltely but there are several USN Modern Paints sets that might have most. I suggest Sprue Borhters as a vendor as they ahve a nice selection