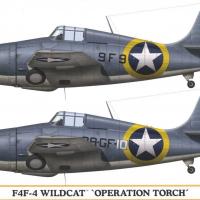 Operation Torch (initially called Operation Gymnast) was the British-United States invasion of French North Africa during the North African Campaign of the Second World War which started on 8 November 1942. The successful Allied operation has been described as a "critical turning point in the war" and laid the foundations for America’s post-war Middle East policy. Despite its important role in the war, Torch has been largely overlooked.

The Soviet Union had pressed the US and British to start operations in Europe and open a second front to reduce the pressure of German forces on the Soviet troops. While US commanders favored Operation Sledgehammer, landing in Occupied Europe as soon as possible, British commanders believed that such a course was likely to end in disaster.

Landings in French North Africa were instead proposed. On July 28, the Axis Afrika Korps, under General Erwin Rommel, captured Mersa Matruh, in Egypt, only 140 miles (230 km) from Alexandria. Landings to the west would reduce pressure on Allied forces in Egypt. They would also secure Allied naval control of the south-west Mediterranean, and enable an invasion of Southern Europe later in 1943. U.S. President, Roosevelt, suspected that landings in north-west Africa would rule out an invasion of Europe in 1943, but agreed to support British Prime Minister Winston Churchill. Roosevelt wanted to get to grips with Germany as soon as possible, and after the agreement was struck on a Mediterranean landing cabled Churchill on July 27th “I cannot help feeling that last week represented a turning point in the whole war".

Senior US commanders remained strongly opposed to the landings. After the Western Allies' Combined Chiefs of Staff (CCS) met in Washington on July 30, General George Marshall and Admiral Ernest King declined to approve the plan. When Roosevelt was told of this, he was furious, calling Marshall and King to the White House that evening, and giving a direct order that Torch was to have precedence over other operations and was to take place at the earliest possible date. This was one of only two direct orders he gave to military commanders during the war. (The other was in March 1943, when Roosevelt ordered King to transfer 60 B-24 Liberators from the Pacific to the Atlantic, to combat U-Boats.)

Operation Torch was America’s first offensive operation in the European theatre of World War II and was the largest and most complex amphibious invasion in history, until the invasion of Normandy. It was also America’s first armed deployment in the Arab world since the Barbary wars.

Hasegawa’s venerable 34-piece Wildcat kit dates back to 1994…23 years ago. It still holds up well, despite not having much internal detail. The cockpit is very basic, and there is no wheel bay whatsoever. However, there is little flash to clean up, and it goes together easily. This release finds 2 kits in the box with new decals to represent several machines involved in Operation Torch.

The 4-part cockpit is a tub, seat, blank instrument panel, and a control stick. A basic IP decal represents some dials and whatnot. I added some PE seatbelts, which will never be seen. Along with the 2-part engine face, this is sandwiched between the fuselage halves.

Then the wings and horizontal stabilizer are glued together and attached. I needed a small amount of filler along the wing roots, and this was the only time filler was used. The kit fits together quite well, overall. Panel line details are appropriate and finely engraved. The undercarriage is a 3-part assembly, and positively locates into the mounting brackets for a proper stance. The wheels provided are my biggest criticism. Tiny in 1/72 scale, each suffers from large, raised mold ejection marks. These need to be carefully carved and sanded away. True Details makes resin replacements, and I’d use those if I built this kit again. They also make a nice cockpit tub, too. The wheels were no problem to attach/align.

Lastly, the antennae mast and single-piece canopy attach, and it’s ready to be masked and painted. The clear parts are all blemish-free.

Tamiya Acrylics were used, and an AMMO by Mig enamel washed was applied for light weathering. Testor’s Acryl Semi-Gloss sealed it all in. The decals were thick, and a bit brittle. Also, the yellow-roundeled National Insignias were slightly out of register. Markings are included for 3 machines:

Overall, this is a simple build, and I can recommend it without reservation. Thanks to Hobbico and IPMS/USA for the review sample.