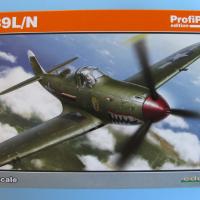 Although it has been a few years since Eduard released their newly tooled P-39, this latest issue of the L and N versions holds up to the standards of any current aircraft molding. Markings are included for three planes flown by Americans as well as for two Russian-flown aircraft. In addition to markings for multiple aircraft, the ProfiPACK includes masks for all of the clear parts as well as color photoetched parts. The kit builds up well, with minimal filling being required on the fuselage seam, and nowhere else, and can be built by any modeler with limited experience in order to create a reasonable looking Airacobra. Parts are included for the L and N variants specifically for the markings included, but other variants could be built if desired.

The Bell P-39 Airacobra, also known as “the Iron Dog”, first flew on 6 April 1938, which was just shy of three years after the Bell Aircraft Corporation was first formed. The XP-39 was the second aircraft that the company designed, and it was intended to be powered by an engine with a turbosupercharger that would propel the plane at speeds in excess of 400 mph. Due to issues with the turbosupercharger, and the addition of weight due to the requirements of the equipment installed, the plane never saw its true potential realized. The Airacobra was similar to the venerable A-10 still in use today, as both planes were designed around a large weapon mounted in the nose of the aircraft

The plane that I depicted in this review was a P-39N-1 variant, of which 300 were built in its block that was approved on 21 February 1942. This was out of 2095 N-variant Airacobras in total, all of which were powered by a 1200 h.p. Allison V-1710-85 engine. The plane had a 37mm (1.5 inch) cannon in the nose as well as two fifty-caliber and four thirty-caliber machine guns. My particular plane was assigned to Major Charles W. Hoover while Commanding Officer of the 345th Fighter Squadron, who was credited with 1 ½ victories. This was the only plane known to carry a shark’s mouth motif while operating in the Mediterranean.

Upon opening this kit, the builder will find three sprues molded in a medium gray plastic, one clear sprue, an Eduard Mask, a color photoetch fret, decals, and instructions. All told, there are 133 plastic parts in the kit, 46 photoetched parts, and the decal sheet has, in addition to the aforementioned markings for five unique aircraft, full stencils for the plane. The instructions are contained in a sixteen-page manual printed in color, and using a glossy paper. The front page of the instructions contains a history of the aircraft followed by a page showing part locations on the sprues, then seven pages for construction, and one page showing mask installation locations. The final six pages contain the color and marking information for each potential Airacobra, including a brief history of each plane, and the final page shows the locations of the stencils.

In building my kit, I used Aeromaster Warbird Neutral Gray for the underside, and finally got to try out my Vallejo Olive Drab paint set for the topside. Other colors included Model Master Acryl Interior Green, Aircraft Interior Black, and Chrome Yellow, as well as Model Master Lacquer Silver and Gloss Red. Model Master Metalizer Burnt Iron was used on the exhaust pipes, Tamiya Clear Red and Clear Green on the lights, and Vallejo Dark Rubber for the tires and Off White for the wing tips, tail tip and fillet. The Vallejo Olive Drab set was a pleasure to use, and I had been waiting for a while to have something to try it out on. The colors are pre-mixed for airbrushing, but I added a drop or two of thinner to each to get the consistency I am used to pushing through my airbrush.

Many of the decals set fine using only Micro Set, but everything got a coat of Micro Sol just to play it safe. I actually had to use Solvaset to get the decal of the star and bar to settle on top of the wing. When I was gluing the fuselage halves together, you can see that I had already added ¼ ounce of weight, and I fortunately left off the gun cover up front, as that allowed me to add another 1/8 ounce weight later, which was just enough to set the plane on the front wheel.

As far as my hits of this kit are concerned, the details in all of the parts are up to the usual high standards of Eduard. All moldings were clean and crisp, requiring almost no clean up on my part. Assembly was straight forward, and there were minimal fit issues with the items during assembly. The clear parts that Eduard produces are nothing short of spectacular, and molding the entire door assembly clear allows for easy masking and painting, vice having to install the glass separately. This was my first time using Eduard masks, and they worked beautifully for me, so I will look forward to using more of them in the future.

As far as my misses are concerned, my only real issue was in regards to the decal directions, specifically for the wing walks as they are reversed in the directions (if using them, S1 goes on the right, top wing). When I peeled the mask in an attempt to airbrush the wing walks, the mask rolled up on me, becoming unusable. In the end, I painted the masks black that are used to cover the areas if they were pre-painted black ahead of the olive drab, and just installed them on the wings. I read an article years ago about doing such a thing with masking tape, and this was my opportunity to try it; in the end, I like the results. I question why some of the stencil decals such as S25, 39, 16, and 31 are only shown on one side of the fuselage, and panel lines in the drawings used for the stencils did not match my plane when placing some of the decals. My final comment in regards to the decals is that the warning (red) stripes on the wings would need to be shortened to sit as shown on the directions; without trimming them, they will cut through a fuel cap. My only construction comment is that there were no holes in the forward fuselage for vents C30 (there are two of these), C29, and C40.

In conclusion, I would highly recommend this kit to modelers with an interest in building a very nice Airacobra. The kit builds up with almost no issues so that even a modeler with limited experience can turn out a respectable plane. Being a ProfiPACK release, I would recommend some experience with using photoetch parts (some of which are very small) to prevent frustration. For those looking to add a P-39l/N in either American or Russian markings, I would point them in the direction of this release by Eduard.

Thanks to the folks at Eduard for providing this sample to the IPMS USA for review, to Dave Morrissette, who runs the Review Corps for selecting me to appraise this kit, to the folks behind the scenes with the Review Corps who keep things running smoothly, and as always, to you for taking the time to read my comments.