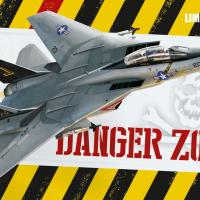 Eduard’s “Danger Zone” release of the Hobby boss 1/48 F-14A with resin, Photoetch, and canopy mask embellishment, is a great package. Here’s why I think so:

Starting with the cockpit, remove the molded in detail, assemble the parts, and paint interior gray. Then apply the PE side and instrument panels. The whole thing looks stunning when complete. Let the pictures speak volumes…

Basic kit assembly: As I stated before, this is a Tomcat. The nose section is separate from the main fuselage; Hobbyboss decided to go with the vertical split verses the horizontal split, and this means the seams are top and bottom; easy to deal with. The landing gear wells are multi-part assemblies, and take a bit of care, but they all line up and fit in place inside their respective locations. Speaking of Landing gear, there are a LOT of little bits, and they CAN be installed at the end of the build. The instructions would have you install them while building the basic model, which is a great way to break them off during construction. I purchased a set of SAC metal gear to use for this build, and installed them toward the end. Forewarned is…

One more note: NOW is the time to open up the mounting holes for the wing root rails and the under-nacelle external tank mounts. Same for the Phoenix missile pallets; if you are going to use the TARPS pod this also applies.

The interior fits positively between the forward fuselage halves. This kit provides you the option of open avionics bays (with no avionics!)… You can also show off the generic kit-supplied M-61 Vulcan cannon with open doors. This is a good option for a maintenance diorama, but I’d recommend a master details gun if you are going to do this. I closed these doors, leaving only the steps and ladder doors for display later.

The kit provides two complete engines. You won’t be able to SEE them when the kit is complete, but some gain comfort from having one “that they know is there”. On this build, the resin replaces the kit items, so don’t bother. Consign to the spares bin!

The intake trunks are separate and build up from two-part tube halves; cement, clean up the seam, paint white, and install. To this you add resin engine faces. There are two types of fans with their different engine design; the standard (earlier) Pratt and Whitney TF30 engines with bullet fairings are appropriate for this boxing, but the additional intakes with no bullet fairings hint at future F-14B and D models , which use the General Electric F110-400 engines.

The intake ramps are multiple-part per prototype, and are actually very well done and secure when installed. You then install the actual intakes, and this is a good time to clean up the fore/aft seam before proceeding.

The bypass bleed ducts at the top of the fuselage have excellent interior detail and positive ejector door features. Speed brakes on my build were installed closed; I have never seen them open on the ground, so that made it easy for me.

At this point you will put the upper and lower aft fuselage parts together; as stated before, the fit is good. One modification I recommend is to leave off the wings until the model is about finished. Then you can cut slots from the wing root to facilitate sliding the wings into place on the pivot pins and not worry about breaking off all the actuator arms for the slats on the very-vulnerable extended wings. (personal experience here).

It is at this point you install the forward fuselage to the aft; take your time and you’ll have very little to clean up. Tail fins are two piece items and fit positively; no filler required. The lower fin strakes under the nacelles also fit very well in place. The stabilators are two-piece items, and press-fit in at the end of the build with positive friction. This makes your life easier to do it this way, and also helps with painting, masking, decaling, etc.

Speaking of painting: I used Tamiya bare metal for the leading edge areas; maked when dry, then I used a rattle can (Testors) for the overall light gull gray exterior. One place where the 1/4small foam squares in a lot of Eduard sets come into play, as they are perfect for masking… intakes, gear wells, etc… cut to fit

Slats are single-piece items; easy to install. Flaps are two-piece, required a bit of filler on one seam, but also fit into place nicely. The wing sweep inflatable root sections are provided as a “wings forward or swept” option; make sure you choose the right ones for your preferred position.

Landing gear and gear doors are next; home stretch. As stated before, I used SAC gear, painted with my favored Duplicolor primer flat white and gloss white finish. Take your time to get all the bits and pieces on these things; there are at least 10 separate items for each main gear, and almost as much for the nose gear. You can have either standard weighted nose gear or compressed with the Catapult shuttle arm in the down position for the Diorama builders out there.

The burner cans (augmentors) are two-part items for the basic tubes and the turbine section. These need a primer flat white coat, detail painting, then installation of VERY fragile flameholder grids. There is positive location between the fore and aft tubes, but you will need to be very careful when you install the nozzles themselves, because they don’t have positive locators. Just center them while the superglue is still setting… These slide into place and look great when finished.

Wait, there’s more! Eduard’s Wheeliant Wheel and tire assemblies! Remove from the casting blocks, open up the axle bearing holes with about a 1/16” drill bit, and use a lacquer-based paint to preempt any scratches from handling. I use Duplicolor white primer with white gloss for the wheels, and Duplicolor Flat black for tires. A very nice final touch… simple, and they look far better than the injection molded items. Resin… my favorite.

I did not use the kit weapons; the AIM-9L and AIM-7’s were good representations, but I have the Eduard items to use (so they are not part of the review this time). Same for the Phoenix missiles… The kit items have large bands around them which do not exist on the actual items. The Eduard missiles are better detailed, and come with decals. Worth every dime…

I painted all the gear door interiors white, then masked and painted the exterior color. Then, out comes the medium-point sharpie red pen; this has become my favorite method to do the door edge markings. If you use lacquer gloss paint, there is just enough tooth to let the marker work, while not eating through the paint. Install with the actuators…. and you are finished. A few antennas, then the small clear navigation lights in the usual places…

The ejection seats took a night to complete; I had previously painted the frames gloss black, and the seat cushions olive drab. Removing the parts (carefully) from their frames was the order of the day, then lots of little bits from the second PE set in the kit. HYPER detailed… even a set of decals to detail up the headrest. Installation was flawless…

The last item to install was the canopy. I had previously removed the upper mid seam down the center, polished it out, and used future on it. Mask and paint, glosscoat, decal, gloss and flat, then remove the masking. Only one area lifted, that was my fault on the forward left windscreen. A bit of cleanup and it was ok. I took my time with all the PE details here; one slip and it’s a ruined effort all around. The part fit perfectly, and after touch up paint it was time to install… DONE!

This one took me a bit longer to finish; the fine details took longer than expected. Contrast this to the old Fujimi or Monogram F-14, and it’s worth the effort… a full 10 on the scale… Thanks again to Eduard for providing the kit and IPMS leadership for the opportunity to review this gem!