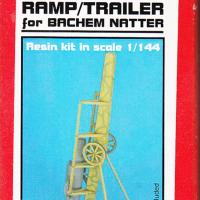 The Spring of 1945 was not a good time for the Luftwaffe. Large numbers of Allied fighters were patrolling the skies over the Reich, bombers were decimating the factories, the transportation system, and the whole industrial complex. They were also bombing and strafing air bases wherever they found them. The Me-262 was slowing down the rate of attrition, but not stopping it.

The idea for the Bachem Ba-349 "Natter" was that it would be built of wood, and instead of factories, it would be built in woodworking shops, requiring no strategic materials except the rocket engine and the armament.

The next idea was to eliminate the steel launch tower and launch the Natters from pine trees which were stripped of their branches. This allowed the Natter to be launched from just about anywhere, but the labor required to remove all of those branches and the idea that the launcher would be fixed made this a less than outstanding idea. And someone came up with the idea of making a farm cart into a launcher. And this is a kit of that idea.

The Natter never reached production, and the "launch cart"was never built, but it’s certainly food for thought, especially among the "Luftwaffe '46" folks.

The first thing to do is remove the parts from the resin pour sprues. The folks at Brengun did a super job of designing the molds. There are no big/heavy attachments for the resin parts, which is great, because most of the parts in this kit are delicate. I used a fine-toothed photoetched razor saw which I bought a while back from Verlinden. The blade is only about an inch long, and it mounts in an X-Acto handle. Much of the material around the parts was very thin, and it was removed with a #11 blade. There were only a couple of spots which required a few strokes of the sanding stick to make them disappear.

After letting the assembly set for a day or so, I took up the vertical supports for the launcher. I decided I wanted to build this in "launch" mode rather than transport. The supports for the launcher can be built folded into holders on the side of the launch rail, and the vehicle then can sit on its wheels. In this mode, it would be possible to transport two Natters out into the countryside for launch. Then they would get to go back and get a couple more.

The bottom supports are marvels of engineering by Brengun. The bottom end of the launch rail has two pegs which are the mounts for the bottom supports. The fit on these parts was amazing. The pegs fit exactly and tightly into the slots in the supports. This was very useful because it allowed me to set the vertical supports in place and get things aligned before I had to glue everything together.

The vertical supports fit into slots in mounts which slip over the axles on the sides of the launch rail. Again, the fit is just beautiful, the part can be moved, but stays put and doesn’t fall out until it’s glued. The other end of the vertical support fits into a hole in the bottom support. Once these are aligned and glued, the structure is amazingly strong.

The only problem I found was that the launcher had a tendency to fall over. I added a piece of modeling clay that looks like a large rock to anchor the bottom.

Painting was very simple. I chose RLM 02 as a color that looks sort of like camouflage, and painted the entire launcher.

Decals were even simpler than painting. There aren’t any.

I put a Brengun Natter next to the launcher, and then in the launch rail. It looks convincing. I may have to glue it to insure correct alignment.

This is a great kit, well engineered and pretty easy to build. If you have one of the 1/144th Natters, this would be a nice addition to the built model.

Many thanks to Brengun for this well engineered kit, and to IPMS/USA for the chance to build it.

Transporter with Natter 3
Previous Next