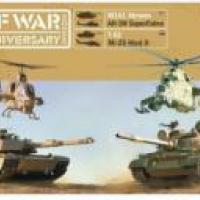 Since this is a large box of models, Jim Pearsall asked me if I would like to build the Helos from the set. I was glad to accept because both of these models are on my “Models I want to build list”.

The AH-1W Super Cobra helicopter is a close air support attack helicopter used by the United States Marine Corps. It has a 20mm M197 Gatling gun; and can carry Hydra 70 rockets, 5 in Zuni rockets, TOW missiles, AGM-114 Hellfire, and AIM-9 Sidewinders. It was originated from a U.S. Army demonstrator concept helicopter in 1962 based on the Huey UH-1. The Super Cobra was the world's first attack helicopter and the Marines have been flying it since 1986.

This kit is a reissue of the Italeri Super Cobra and consists of 72 parts. It didn’t have any excessive flash and the detail was good. It did need to have the seams scrapped after being put together but it went together very well.

The instructions are divided into 5 steps. The 1st step, of course, is the cockpit. The interior is all flat black with the Marines red color seats. The instructions color call outs are for Italeri acrylic paint but it also has the F.S. colors noted.

The 2nd step is to put everything that needs to be inside the hull inside and then putting the hull together. That would include the Gatling gun, cockpit, rotor shaft and housing. Don’t forget to add the nose weight up front. There isn’t very much room but I was able to get enough bird shot in it to do the trick. Next you need to be very careful and glue the hull together so that the inside pieces stay in place. Usually, this can be kind of frustrating, but Italeri did a really nice job on the parts guides and nothing moved.

Step 3 is the step where I only did part of it so that I could do the main body painting. I put on the engine intakes and front sides of the front cockpit and canopy. Now is when I do the main painting. The instructions come with 2 options, both of unknown units. One had an overall desert camouflage while the other had the front and sides camouflaged but the tail was still grey. I picked the 2nd option because it was different. The 2 camouflage colors used were Testers Model Master FS33531 (US Sand) and FS30117 (military brown). The tail was painted with Testers Model Master FS36173 (AMC grey). When that’s all dry I painted the exhaust rust and installed them.

Step 4 and 5 are for adding the weapons mounts, weapons, antennae, landing skids and rotors. I used Tru-color flat grimy black (TCP-804) on the rotors and brushed some silver on the middle parts to highlight them.

The decals were in register and went on well with the Micro Set and Micro Sol system. These helicopters really didn’t have a lot of markings on them. Some didn’t even have national markings so decaling wasn’t too bad.

This was a pleasant kit to build and I would recommend it for a new builder, the box says age 14 and I don’t see there being any problems for them. I am glad to see that there are kits being put out for the Gulf War so that we don’t forget what happened. I would like to thank Hobbico and Italeri for the kit and IPMS USA for letting me do this build.

Left side view of Cobra

Right side view of Cobra

3/4 Top view of Cobra
Previous Next