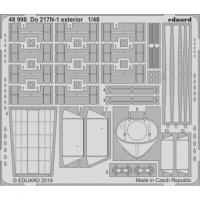 Your use of this exterior PE kit will depend on how you wish to build your plane. Therefore, I recommend the builder take the following into consideration when making a decision about this PE kit: decide in advance whether you want to have an open or closed bomb bay, if you want to have open or closed cowling vents, and consider your tolerance for fragility.

Assembly begins with forming PE for the internal bomb bay components. The review model was completed with a closed Bomb bay due to a misguided construction step in the ICM kit instructions (which is discussed in the separate kit review). However, the PE pieces for the bomb bay are very nicely detailed and will certainly make the kit bombay look more authentic.

The most challenging aspect of working with the exterior PE set is the antenna. The ICM DO 217N-1 kit comes with plastic parts to construct the antenna array of four antlers. Although these look very good, the builder can increase the authenticity by replacing them with PE antenna, but this is no easy task.

The builder is asked to cut away the tip of the kit part and remove 1 mm of plastic from the opposite end of the rod. Next, the builder must make two cuts at 90 -degree angles in the tip of the 0.50mm rod. This is difficult to do. Once this has been achieved, the PE antenna are first bent 90 degrees and then to approximately 45-degree angles and inserted into the tip. After you have one of these inserted into the rod’s tip, you will repeat the process to form the completed antenna. The PE antenna is extremely fragile. In four attempts of assembling a test sample, none cold be achieved without the antenna becoming badly bent and distorted.

If you do want to use the PE antenna parts, I would strongly recommend that you use a single piece of 0.50mm rod instead of cutting the kit antenna pieces apart. This way, you will have the kit parts intact to fall back on.

Overall this is a good PE kit for the ICM D0 217N-1, but its usefulness depends largely on the build decisions of the builder, which must be made in advance.

Thank you to Eduard for the honor of reviewing and using this PE set with ICM Kit Nr. 46271, and thank you to IPMS for the opportunity.