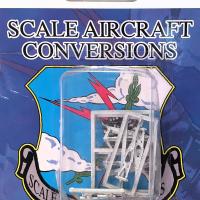 This set includes eight replacement pieces for the landing gear on ICM’s recent Fw 189A kit. There are three parts for each of the main gear mounts (left and right struts and a retraction/extension arm) and two for the tail wheel assembly.

The first step is to remove the casting seams of each of the parts. I scraped of the seams with a Xacto blade and then used a small wire brush in my portable Dremel tool at low speed, to polish up the parts and remove the remainder of the seams. As the struts and the tail wheel are rather easily bent, I did as much of the cleanup before I detached them from the casting tree as it is much easier to handle them while they are still on the tree, plus they are much less likely to bend or go flying when they are still attached. Take care when cleaning out the flash on the insides of the castings, particularly the retraction/extension arms to avoid bending them inadvertently. Once everything was cleaned up, I painted all of the parts Tamiya RLM Grey 02 and the tail wheel Tamiya NATO Black.

SAC has modified the main gear parts by molding the upper cross brace (part A53) to the right side strut assembly instead of as a separate piece. On the one hand this ensures a strong solid join on the right hand side, but I discovered that it made it very difficult to get it attached and lined up correctly on the left side strut assembly as only have the one attachment point. As I was assembling the gear separate from the assembly of the engine nacelles, I needed to ensure that the retraction/extension strut (part A9 in the kit) was free to rotate as I did not know exactly what angle it needed to be mounted at in order for it to fit in the slots on the undersides of the wing inside the nacelles. With just the one glue point at the top brace, the assembly was very fragile and came apart several times before I realized I could use the kit wheel as a spacer to keep the lower part of the assembly in place while the superglue dried hard. It would probably have been easier to just assemble one of the nacelles and use it as an assembly jig to establish the correct angle for the retraction/extension strut and fix it in place at the same time when cross bar was glued.

As with all of SAC’s gear sets, this set can be a nice addition to the base kit, but it will take a little time and patience to get it assembled correctly.

Thank you to Scale Aircraft Conversions for the review sample.