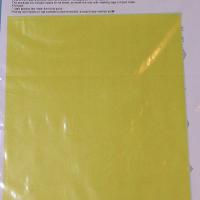 Every once in a while this reviewer makes a serious mistake…due to whatever reason. In this case I fell into the trap of writing a review for a company product (New Ware, in this case) and crediting a different company ( DN Models, who I have been using frequently on other projects).

No excuse for this and my sincere apologies for both companies.

IPMS/USA thanks a new supplier, New Ware, for supporting the IPMS USA reviewer corps with one more of their prolific releases. I have only recently been selectively purchasing masking sets, and am finding them almost exclusively a must-use item.

And of course, thanks to IPMS leadership for sending it to me to be reviewed.

One of the benefits of procrastinating at assembling a kit is occasionally something comes along which makes it easy to move said kit up in the building queue. In this case, the availability of New Ware masking sets to IPMS was an epiphany to me: These addressed the dread I had of painting the final B-2 model scheme.

painting departing from FS 36118 Gunship Gray over satin black to overall 36118 Gunship gray, the panels still are a different tone and appear a different color due to how they are applied. Also, there is still need to weather the surface to capture the look of the jet after it’s flown a few sorties, and that includes the panels being removed and replaced and re-sealed with RAM during maintenance.

Two masking sets were provided by New Ware to Phil, and I had an epiphany after I finished the last review items… they had been languishing in the pending review pile, and it hit me that I could easily finish the new, expensive (but nicer than the old Txxxxx company’s B-2) without my becoming a total mental case. (I claim this is why I am how I am after masking two separate F-35 models.)

After snapping up both the sets, (the first has mask materials for the windscreen, wheels and tires, and the second was for the majority of RAM panels on the aircraft), I set about building the model. These are now sold as part of one set. I planned to use Black Dog’s gear and bomb bays for the kit, and those took some time to install. After assembling the kit, (which I shall not comment on other than it took a lot more work than I expected), I masked the windows and Gear/Bomb bay wells, then sprayed the overall model with Gray Primer.

More filling and sanding was required, then I sprayed the model Tamiya Dark Luftwaffe gray Violet. After curing for two days, I used the masks. I found they behaved extremely well, sticking down where I put them, and not lifting up even when teased a bit. The next paint coat was Tamiya Gunship Gray (Not their Gunship Gray 2, it’s a different shade).

More curing time, then I removed the masks. The pictures tell the story; a basic Bat with the new RAM panels highlighted. I was more than pleased with this, as the colors looked good before a bit of weathering would commence, and I had not marked the outside of the model with a bunch of knife cuts.

On the wheels, the tire masks seemed a bit short as each had a small cut out area which did not join up, which would have required my using extra tape to finish. That, and I learned on other projects, masking tires is pretty easy but you still end up touching up. I therefore decided to alter the process, where I paint the wheels white, then use the center circles to mask the white before painting the tires black. This worked perfectly and was easier than masking the tires.

After spraying, I had removed the mask and put it back on the backing paper so I can test it’s performance later (as the claim is “you can re-use these masks!”). I also have used the mask outlines to mask off some areas that needed more work like the Aerial refueling door.

The pictures show the final result, and I’m very pleased how they worked. I did not remove the mask from the windscreen as I had to put the project aside to do other time-critical things, but you see how the masking worked.

Thanks for the opportunity to review these items, John and Phil, and for everyone, both New Ware and DN models, Please accept my deepest regrets for a major error. Both companies provide excellent products and are highly recommended