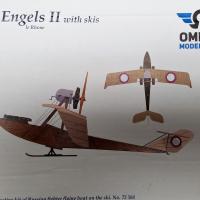 Designed and built by Russian engineer E.R. Engels, the Engels II was a parasol-winged monoplane flying boat first flown in 1917. Designed to fly using wing warping rather than ailerons, the aircraft was at one time the fastest flying boat in service. An egg-shaped pod held the fuel tank and structure for the 120 HP LeRhone rotary engine. Armament was a single, fixed 7.62mm machine gun mounted in the nose. The graceful parasol wings incorporated sharply downswept tips that served as floats.

Omega’s kit, produced in the Czech Republic, is a limited run all-resin product that presents challenges best left to the experienced modeler, but with care and attention creates a diminutive gem of this one of a kind design. The box contains several “wafers” of parts that must be carefully separated from a large resin plug. In retrospect, I strongly suggest some way of maintaining the identification of each part after removal and cleanup, as many of the shapes are pretty similar once removed from their bases.

After several nights of this process, construction starts with the cockpit, which is pretty well detailed once everything is installed. After painting the interior various shades of wood, and picking out some details with brass, the completed fuselage was sanded and given a coat of Tamiya Gray Primer. The wingtips were superglued to the main wing and the cruciform tail assembly was put together, with both units getting a coat of primer. I opened up the strut through-holes (4) in the wing to accept the mounting struts.

I then shot a coat of Acrylics Vallejo yellow over the fuselage, and brushed a coat of 041 Tank Brown over that, streaking it slightly to create a grained effect. A coat of Pledge Multi Surface Sealant gave me a nice glossy varnished look. The wings and tail got a coat of lighter brown (a bit darker than the linen look I was aiming for). Using the instructions as a guide, I drilled tiny holes as required to accept all of the rigging to be added later.

I then moved on to assembling the engine/prop assembly (3 pieces total) and the machine gun. The gun as cast was vague and lacked detail, so I replaced it with an old IPMS/USA Special Products photoetch set. The engine received several metallic colors and I added stretched sprue pushrod covers for some interest. The prop received the same yellow base coat/brushed wood finish as used on the fuselage. I drilled out the center of the engine and a matching hole on the fairing structure and installed a piece of thin wire to serve as an axle. Remember to drill out locations for the 4 sets of brace and control wires and one for the start crank while you’re busy making holes.

There are three circular areas molded into the top of the fuselage that were eliminated during sanding. I think that these are access covers, and in the one photo they appear to be a different color than the fuselage. I used a UMM punch to replicate these in thin aluminum stock, painted them flat aluminum, and added them to the upper fuselage.

The resin struts that mount the wing and power pod were a bit too flimsy and misshapen for my tastes, so I replaced them one for one with some spar stock, using the drawings as a template. There are no positive mounting points for the wing assembly so I used gap filling superglue and handled the model very carefully once the wings were in place.

I used EZ-Line for rigging. The tailplane support struts are stretched sprue. I assembled the skis to their axle but didn’t add them until I had the rest of the plane built, so I could set the model in the correct orientation, using a small dab of slow curing CA to attach the axle to its carrier plate.

Omega includes a set of Russian roundels on a decal sheet, but you’ll notice that my finished model does not include these. (You’ll also note that the wings remain glossy in anticipation of decaling). The decals are printed on a solid white sheet, and I tried several ways to cut them to shape. Each decal shattered into pieces when I tried to remove it from its backing paper, and I had no Russian WW1 roundels in the spares box. I’ve asked Milan of Omega Models to send me a replacement sheet, or I may try printing my own – in any case when the markings are applied I’ll overcoat the wings and tail with a satin clear coat.

Carefully constructed, the Omega kit builds into a unique representation of this little-known aviation artifact. Modelers experienced in working with poured resin parts and limited instructions can have a field day with this and the wide range of obscure subjects available on the Omega website.

My thanks go out to Milan at Omega Models for the opportunity to build this unique kit.