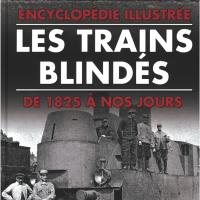 Heimdal is a prolific French Publisher of military history and is distributed by Casemate Publishing. It is a large book at 520 pages and hundreds of black and white and color photographs as well as contemporary drawings and profiles done by the author. The text and captions are in French, though it appears there was an English version of this work from another publisher. My reading knowledge of French is minimal, but that did not take away from my enjoyment of this work. In many regards, the photographs speak for themselves, but a rudimentary knowledge of French might be helpful in reading the captions. It would have been nice to also see color profiles of the trains. There is a plethora of material, so each page is loaded with photographs.

The author, a retired officer of the French Army, has done his homework and offers information on over 70 countries. Each section takes a chronological approach and breaks down the various models and configurations of trains from each country. Once the steam locomotive was perfected, armored trains followed. They have a long pedigree, but as you can imagine, the two world wars generated a great deal of trains in a variety of configurations, so, naturally, this is where most of the material lays. The design could be described as busy. There various profiles that were drawn by the author that are included, but these are largely lost in the packed pages. I would have liked to see these in a more prominent location. What I really appreciated about this collection, was that the author, where appropriate, brings the material into the Cold War, including South Africa, the Balkan countries, post-war France, and the Soviet Union.

Trumpeter and its subsidiary Hobby Boss, are some of the only model companies that have produced German armored trains from the Second World War. Flipping through these pages has certainly whet my appetite for more! Osprey publications released a book in 2008 on armored trains that is a nice supplement to this encyclopedia, but does not even come close in the volume of illustrations in Mr. Malmassari’s book. My thanks to IPMS and Casemate Publishing for giving me the opportunity to review this book.