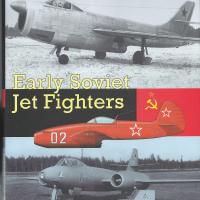 This book covers the development, specifications and history of the first Soviet jet fighters. It is a massive tome that provides a great deal of detailed information on its subjects. The authors are certainly the current experts in the field of Soviet/Russian aircraft and after reading this book it is easy to see why.

I had really wanted to review this book as I have in my possession an ultra rare 1/48 Russian resin kit of the Mig-9 by Airkits. Since material on the Mig-9 and other early Soviet jets has been few and far in between, this is a welcome addition!

The book is broken down into 5 chapters by manufacturer. The order of their presentation is by their importance to the Soviet Union both in development and usage. The order of coverage is Mikoyan Migs, Yakovlev, Lavochkin, Sukhoi and jets of Semyon Alekseyev.

The Mig-9 and all its variants are covered in the first 84 pages. There are many B&W and a few color photos. The text traces the development and usage.

Next the various Yak jet fighters are covered from the early designs that put a jet engine in the nose of the Yak-9 piston engine fighter, up through more modern designs. It is this chapter that contains one of my favorite passages! The story of how a Romanian pilot defected and flew his Yak-23 to Yugoslavia,then how the US in cooperation with Yugoslavia took the aircraft back to Wright-Patterson AFB for testing in 1953. There the aircraft was painted in US markings, fight tested then the markings removed, the airframe disassembled loaded onto a C-124 and then returned to Yugoslavia. The Yugoslav government then returned the plane to Romania. All in all a great story of Cold War intrigue!!

The Lavochkin designs covered are mostly prototypes that did not see production. Several of these seem to be derived from the Me-262 design but with the engine in the nose-pod configuration used by the early Yaks as well. The production La-15 is given in-depth coverage and will aid those awaiting the new Scale Bureau kit in 1/48 scale.

Sukhoi’s early jet, the Su-9 is an obvious follow on to the Me-262. This is not to be confused with the supersonic Su-9 Fishpot when the designation was reused. This design along with the follow on Su-11/Su-13 (looking like a Me-262 with Meteor style wing engine pods) never advanced beyond the prototype stage. The same fate awaited the more modern designs such as the Su-15 and Su-17 as the original Sukhoi design bureau was shut down in November 1949 over the strong objections of the air force.

Lastly, the authors cover the aircraft designs of Semyon Alekseyev. Until this book, I had never heard of this designer or his aircraft but he was one of the first in the Soviet Union to begin designing jet aircraft. His main designs, the I-210/211/215 bears a striking resemblance to the RAF’s Meteor. While none of his designs went into production, his important contribution to early Soviet jet design is well covered.

This is a great book! The authors again demonstrate that they really know their subject and do an excellent job of communicating that knowledge to the reader. The photos and color profiles are gorgeous. Much of the information and history of these early Soviet jets has been unavailable till now! The secretiveness of the Stalinist era and communism in general have long kept this information locked away. Now it is here for all to see and learn from. If you have an interest in Soviet aviation, early jets, the Cold War or military aircraft in general, you will love this book! There is much here for the modeler too, inspiration to build some of these early jets and to add the level of detail each modeler wishes! I strongly recommend this book to all as well as any other by there two authors!