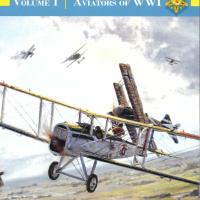 Alan Durkota’s second edition of Medal of Honor Volume I: Aviators of WWI, is one of the latest from Aeronaut Books. This edition is in their standard 8.5” x 11” format square-back softbound publication that is 148 pages (excluding covers). The first edition was published in 1998 and was 112 pages long, so to save you the math, this second edition is 36 pages longer. A new front cover highlights another difference between editions, with the second edition featuring a new Russell Smith painting of Robert Robinson & Ralph Talbot in their Dayton-Wright DH-4 on October 6, 1918. The rear cover is also new with color illustrations of the Medal of Honor and of all eight winners from this Volume. I counted 150 black and white period photographs and 12 color photographs. Juanita Franzi and Bob Pearson contribute 44 color profiles along with 16 scrap views. There are two illustrative color maps, two color figure illustrations, and three color paintings.

All eight of the Medal of Honor narratives are very interesting, but I focused in on Charles Hazeltine Hammann’s story. Specifically because I had recently acquired Lone Star Model’s 1/48 kit of the Macchi M.5 that also included Hammann’s markings. Hammann was awarded the Medal of Honor for rescuing George Ludlow from his disabled Macchi M.5 and flying the overloaded aircraft back 60 miles to Porto Corsini [Page 047]. Hammann had had considerable trouble taking off with Ludlow as his Macchi M.5 was taking on water due to bullet holes sustained from the aerial battle. Ludlow was hanging on engine mounting struts as the Macchi sustained additional damage to its nose before becoming airborne. Upon landing this damage caused the Macchi to nose into the war and flip on its back, trapping Hammann under water. Luckily Ludlow was able to dive underneath the aircraft and free Hammann from his safety belt.

Alan Durkota has delivered an essential book on WWI aviators that is presented in an easy to read style. Each story is quite interesting for the aviation historian and the details in the photographs and color illustrations are quite supportive for the aviation modeler.

The aircraft that are detailed include:

Three new books were released in this series on the same day with Medal of Honor Volume 2: Interwar Years, 1919-1939, Volume 3: Marine Aviators of WWII Part 1; and Volume 4: Marine Aviators of World War II Part 2. If you have any of Aeronaut’s previous books, you know how great a value this book is. Highly Recommended!

My thanks to Aeronaut Books and IPMS/USA for the chance to review this great book.