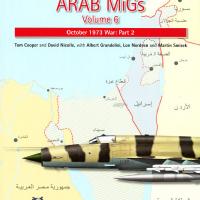 Dr. David Nicolle, born in London in 1944, is a military historian specialized in the history of the Middle Ages, specifically, the Middle East. Dr. Nicolle worked for BBC Arabic and earned a Ph.D. from the University of Edinburgh. A prolific writer on military historical topics, his interests include military aviation in the Arab and Islamic theatre. He was a history professor at Yarmouk University in Jordan from 1983 until 1987. Dr. Nicolle has been quite prolific with dozens of television documentaries and more than one hundred books and even has a Wikipedia page.

Albert Grandolini was born in France and gained an MA in history from Paris I Sorbonne University. Albert grew up in South Vietnam and the Vietnam War has been the focus of many of the books he has authored or co-authored. He has written numerous articles for aviation and AFV enthusiast magazines, including Tank Zone and Fana de l’Aviation. Albert Grandolini is the author or co-author of several books, including: The Fall of the Flying Dragon, South Vietnamese Air Force (1973-1975); ARAB MiGs Volume 6: October 1973 Part 2; Libyan Air Wars Part 1 1973-1985; Libyan Air Wars Part 2 1985-1986; Libyan Air Wars Part 3 1985-1989; The Eastern Offensive – Vietnam 1972 Volume 1: Invasion Across the DMZ; The Eastern Offensive – Vietnam 1972 Volume 2: Tanks in the Streets; Armor of the Vietnam War – Asian Forces.

This is the sixth volume in the Arab MiGs series with a focus on the October 1973 War. Starting off with an introduction, acknowledgements, and two pages of abbreviations, this volume then addresses nineteen pages of addenda / errata from the first five volumes of Arab MiGs. The addenda / errata adds a substantial amount of additional photographs and information that has come to light since the first four volumes were published, kicked off with a photo five of the first 10 Syrian pilots to graduate from the SyAAF flight school in front of a Fiat G.59-2A fighter. Then we get into the meat of the October 1973 War with seven Chapters. I would note that each of these chapters comes complete with extensive footnotes at each chapter’s end. Completing this volume are four appendices, a bibliography, and an index.

I continue to be amazed at the superlative effort presented by the authors. The authors have accessed never-before-seen data, stories, and photographs that enrich the storyline. This includes interviews and combat reports over the backdrop of the political turbulence exacerbated by the Cold War between the US and Russia. The authors acknowledge that such experiences are not necessarily accurate as the claims often can be inflated due to the heat of battle and don’t necessarily stand up to scrutiny once the opposing side’s story is included. Nevertheless, these first hand experiences put the reader inside the battle. Similar to Volume 5 and Part 1 of the October 1973 War, this edition includes a bit more of interface with the Israeli side of the story to better analyze the conflicting claims of the war. The authors contend that the IDF exaggerated the facts, but the sad truth is that with the continuing conflict in the region, especially in Syria, it may be some time before the record can be evaluated further. This Volume, Part 2 of the October 1973 war follows up from Volume 5 that detailed the first few days of the war. The October 1973 war revealed the increased importance, and reliance, of electronic warfare in the battlefield. The Israeli advantage in electronic warfare and targeting intelligence was overwhelming. The Arab vaunted wall of surface to air missiles, while impressive, quickly was overcome by changing tactics and strategy. Indeed, the Egyptian and Syrian anti-aircraft defense forces primary successes were forcing the IDF/AF into dropping their bombload before reaching their targets for a largely symbolic victory. The authors conclude that the October 1973 war removed “the shame of the June 1967 War and restored the Arab military and national pride”. Since most accounts of the 1973 war have been from the Israeli side, this may be hard to accept for some, but that does not de-value the in-depth review of the Arab Air Force’s importance in the conflict.

There are many great sections in this book and one that still stands out in my mind is in ‘Desperate Efforts”. Rifaat Muhammed Ahmed was flying one of four Egyptian Mirages from No. 69 Squadron on the morning of October 22 in what would be his last flight of the war. His flight was ordered to attack Fayid air base. On the approach to Fayid air base he spotted a transport pulling around for landing at the air base. Seeing the easy prey, Rifaat Muhammed Ahmed, jettisoned his bomb load, and went in for the attack. Unfortunately, he soon found a pair of IDF Mirages on his tail pumping cannon fire into the back of his Mirage. Realizing he was badly damaged but still flying well, he decided to return home. A member of his flight, Hussein Hammad, pulled up next to him and advised that he was smoking severely and should eject.

“I pulled the ejection handle, the cockpit hood flew away and then I was propelled upwards with acceleration of 18g. My helmet flew off and I blacked out for a few seconds. I only heard the crash of my plane…” “I landed in a rice field and heard a few shots fired in my direction. A group of peasants came towards me, I called out ‘Egyptian! Egyptian! Egyptian! But they attacked me with axes and machetes and began beating me so I fell on the ground until they saw my inflatable dinghy, which they thought was a bomb.”

Rifaat Muhammed Ahmed was rescued by a Third Field Army sergeant and transferred to a series of hospitals. He had suffered burns from the fire in his Mirage, landing injuries, and wounds from the terrible beating from the peasants who thought he was an Israeli pilot.

Tom Cooper, David Nicolle, Albert Grandolini, Lon Nordeen, and Martin Smisek have delivered an incredible tome in Volume 6 of this series. I must state that this is not a mere photographic essay, but an in-depth pursuit that will take you some time to assimilate. I had seen this book at IPMS Nationals, but had passed it by. I’ve previously reviewed Volumes Three, Four, and Five; now I need to go buy Volumes One and Two. The rare photographs are aligned with the timeline and illustrate the text greatly. My thanks to Casemate and IPMS/USA for the chance to review this excellent book.