The Douglas A-4 Skyhawk, A Comprehensive Guide 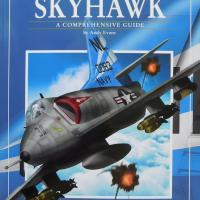 If you are in the market for a single, thorough guide to the Douglas A-4 Skyhawk, this new offering from SAM Publications would certainly fit the bill. With text and scale drawings by Andy Evans, and color artwork by Ryan Dorling, this book includes in-action photographs, color side views, models of the plane in 1/72 and 1/48 scale, walk around photos, technical drawings, and scale line drawings. For fans of the venerable Skyhawk, I would consider this a must-have book, and as 25 of the 31 books in this series are now out of print, I would advise picking your copy sooner rather than later.

Following a Glossary and Introduction, the seven chapters of this book are Design and Development, US Navy and US Marine Corps Skyhawks, US Navy and US Marine Corps Skyhawks at War, Two-Seat Skyhawks, Skyhawk Aggressors, Export Skyhawks, Colour Side Views, and Modelling the Skyhawk in Popular Scales. There are an additional six appendices that include walkarounds, Skyhawk Variants, Skyhawk Squadrons, Technical Diagrams, Understanding the Subject, and Kitography. The book concludes with scale drawings in 1/72 and 1/48 scales and an Index.

For those not aware, the Skyhawk started life as a fighter design, but as the US Navy had other aircraft being looked at for this role, it was suggested that Douglas continue the design as an attack aircraft. The specifications were for the plane to be able to carry 2000 pounds of weapons (including nuclear), have a combat radius of 345 miles with a top speed of 500 miles per hour, and a maximum takeoff weight of fewer than 30,000 pounds. Ed Heinemann responded with an aircraft that had a flight radius of 460 miles with a top speed of 600 mph, and a gross weight of only 14,000 pounds. The preliminary mock-up was inspected in February 1952, and Douglas rolled the first XA4D-1 out of the El Segundo, California plant in February 1954. The Skyhawk received several nicknames during its career including, “Heinemann’s Hot Rod”, “Bantam Bomber”, “Kiddiecar”, “Scooter”, and “Tinker Toy Bomber”.

A combination of black and white and color photographs tell the story of the Skyhawk visually through the first six chapters of the book followed by 24 color left side views of the Skyhawk by artist Ryan Dorling. The modeling in Chapter seven includes color photographs and great write-ups for each of the dozen builds, which are based on kits that should be reasonably available to modelers. The walkarounds include four different aircraft in separate museums and this appendix ends with photos of the weapons being carried and used by the plane. The Technical Diagrams originated in NAVAIR manuals while “Understanding the Subject” shows the subtle differences between the various models of the plane. The Kitography appendix includes available kits in 1/72, 1/48, and 1/32 scale as well as decals and accessories in all three scales.

Overall, I would highly recommend this book to any modeler or historian wanting an all-inclusive book on the A-4 Skyhawk. As I alluded to previously, the books in the MDF Series are only in production for a finite period, so if you are interested in obtaining one, I would not delay the purchase. I would like to thank the folks at SAM Publications for providing this book to the IPMS-USA for review, and I appreciate having been afforded the opportunity to write this appraisal. As always, thanks to you the reader for taking the time to read my comments.

Sample page from book
Previous Next