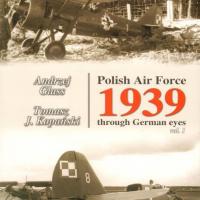 This softbound book contains 264 pages of high quality photos taken by German occupiers printed on high quality paper. What I did not know was that pre-war Polish security concerns prohibited photos from being taken from 1937 until the war. That is why there are, according to the authors, only around 25 photos of pre-war Polish aircraft. Then after the invasion anyone seen taking photos was suspected of spying and detained, plenty of reason that there are so few photos. The German photos became the only source of knowledge and markings from the Polish Air Force. The quality of photos is very high even though most of the aircraft are in states of disrepair.

Broken down into the various regions there are ten chapters. There are recon photos and drawings of the various airfields and descriptions of the attacks from the first day. The fate of many of these aircraft and the units are covered. What is unique is that this book doesn’t just contain the military aircraft but some of the civilian ones as well.

The lack of operational photos makes this book an essential tool for the historian and the modeler. There are many unique aircraft, including test aircraft, as well as the ‘normal’ PZL-7, PZL-11 and PZL-23. The Lublin R-VIII is a beautiful aircraft that figures well in the photos.

The text is easy enough to read as it is all written in English. OK some of the Polish wording is difficult to pronounce but there is no way around that.

I’m positive that if you have even an inkling that you might like Polish aircraft or the history of the early phases of World War II, this is a book for you. Good news is there is a second book coming soon.

Thanks to Mushroom Model Publications for the review copy. You can obtain your copy at www.mmpbooks.biz . Make sure you let them know that you heard about it at IPMS/USA.