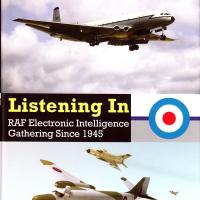 Since I spent a lot of time in Air Force radio, some time in AF intelligence, and being generally interested in communications (I have an extra-class Amateur Radio license) this book was right down my alley. Additionally, being interested in post WW2 British aircraft is also a plus with this book.

The theme here is airborne ELINT, electronic intelligence. You can learn a lot by listening to what the other guy is saying on the radio when the fighters are up and practicing interceptions or tactical support. And that’s where the British started after World War 2. When you’re flying at 20,000 feet you can hear a lot more UHF and VHF signals because these frequencies are line-of-sight communications. The higher you are, the further you can see and hear.

Up until about 1949, RAF ELINT consisted of listening to the radio communications. Everything else was considered as “noise”.

Then came the realization that the Russians were not just using the radar sets we gave them during the war or captured German equipment. They were getting their own ground and airborne radars. And it would be super handy to know about them. Frequency, pulse rate, location and signal strength are all very useful in determining how to spoof or jam a radar. And gathering information on the “noise” became the main thrust of RAF airborne Intelligence missions.

The RAF used some interesting planes right after WW2. They started with Lancasters, then Lincolns, and Washingtons. The Washington, a B-29 with roundels, had an interesting career, with many engine problems. The book brings out the fact the USAF would perform engine overhauls at 250 hours of operation. The RAF somehow decided that 850 hours was a better number, and they paid for it.

RAF ELINT entered the jet age with the Canberra, and later the Comet. Following these two airframes, the RAF adopted an ELINT version of the Nimrod. Today they are converting to a version of the Boeing RC-135W Rivet Joint aircraft. It would be interesting to see the RC-135W with RAF roundels.

There have never been a large number of RAF ELINT aircraft.

Because it’s difficult to figure out which aircraft were used for these missions, this book is quite helpful, as it provides drawings of antenna and radome locations and photos of the few operational aircraft. The book includes enough information to build a model of any of the aircraft types in this book.

Unlike the US CIA’s U-2 missions, the RAF rarely flew over “enemy” territory. Most of their missions were over water, including the Baltic, Caspian Sea, Black Sea, as well as along the borders with Russia like Germany and Turkey. Rarely there were more than a couple of missions per month, but the information was needed.

With the except for aircraft types, information less than 20 years old is still classified and obviously not included in this book.

Recommended, particularly if you’re interested in ELINT or the Suez, Falkland, Iraq, Bosnian, or Afghan campaigns, where these planes did yeoman work. There’s a lot of information in here that just is not to be found anywhere else.

Thanks to Specialty Press for this look into a secret area, since declassified, and thanks to IPMS/USA for letting me enjoy sharing this information with you.