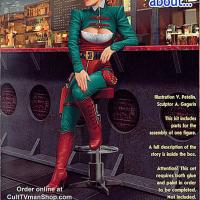 No one can slight Master Box Models for a lack of both imagination and daring. Their figures have set the bar for the entire injection molding industry in terms of concepts and boldness, and this new addition to their 1/24th scale stable is no exception. Set in a sort of “Star Wars” cantina, this is the first of an eight-figure set which includes saucy ladies, robots, strange elfin characters and burly mercenaries.

The first in a series entitled “At the Edge of the Universe. Strange Company’s adventures. Episode 1. The first meeting,” shows a level of ambition I’ve rarely seen in plastic. Theoretically, this is supposed to eventually include not only the original eight figures meeting for the first time in this cantina setting, but further figures in the line showing them on their adventures together – a sort of SF story in plastic. Whether Master Box can sustain such an output and whether the market will absorb it are two different issues, but this is a very good start indeed.

This first kit features “Jacqueline”, a grifter of some renown who plies her trade through feminine wiles and psychotropic drugs. Apparently on the run from the Galactic Security Service, she is about to embark on a mission both dangerous and glamorous.

The kit itself supplies not only Jacqueline but a bar stool, a small segment of the counter and three small glasses. For the most part the figure was easy to assemble, although the main torso came in front and half pieces that didn’t fit together particularly well. A wee bit of putty set that right. Other than that I encountered no difficulties in assembly.

And so on to the painting. As with any science fiction figure, her outfit is only limited by your imagination, but I rather liked the box top presentation so decided to go with that. I didn’t much care for the three small opaque plastic glasses, however, so replaced them with some items from another Master Box kit which looked a bit better in my opinion.

Frankly, I enjoyed making this kit enough that I very much want to continue the whole line, and have even considered creating the cantina scene in its entirety with some flashing colored LEDs to lend it an appropriate atmosphere. I’ll still need to find something suitable for the bartender, though – a surprising omission that Master Box might rectify in the future. Maybe another robot?

In any case, this is a truly fun kit with more than a bit of difference from almost anything else you’ll see on the market today – a charming break from tanks and planes and such. If the entire series shows this kind of flair, I can heartily recommend you “dive” into this series and give it a shot. My many thanks to Master Box for taking such a dramatic move and to Stevens International and IPMS/USA for the chance to try my hand on this figure.