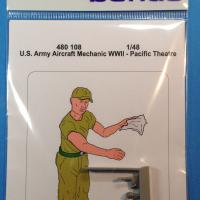 Thanks to Aires Hobby Models for sending these excellent diorama figures for review. Thank you to the IPMS Reviewer Corps for letting me review them! I am very appreciative of the chance to contribute back to the scale-modeling community.

This review covers four separate releases that complement each other very nicely. The four figures represent WWII U. S. Army aircraft mechanics in the Pacific Theater. One mechanic figure is pushing upward, perhaps against a fuel tank or engine part, another could be wiping down or polishing, and another figure is mopping up. The last figure is taking a rest on a footlocker sipping a bottled beverage. They are all cast in gray resin with protective pour plugs surrounding the figures. I found the resin to have a very nice balance of workability and strength. I had no troubles with brittle parts or needing to do excessive sanding. Flash was minimal and easily removed when present.

The detail on all of the figures is very nice. Each figure has a slightly different facial expression and other subtle differences, i.e., bent hat brims. The basic body positions are fairly fixed with separate arms and sometimes heads, allowing some customization. I found that slight position changes were possible, such as having the mop head being slightly off the ground and hanging down. The first pass for painting was completed in Vallejo acrylics with no problems. The only preparation I used was an overnight soaking in concentrated Simple Green® soap solution.

I highly recommend these figures! They were very enjoyable to assemble and paint. I will be placing them in a diorama soon, after touchup and further detailing, depending on the figure’s final position. I need to coat the beverage bottle in gloss coat to make it look like a bottle! Sweat stains on the shirts would also be appropriate for the Pacific.

Thanks again to Aires Hobby Models for sending samples for review. Thank you to the IPMS Reviewer Corps for letting me review them, it is a very appreciated privilege.

Polishing mechanic in the package

Mechanics waiting for some work

Mop mechanic in the package

Arms up mechanic in the package

Sitting mechanic in the package

Mechanics at work enjoying the shade

Wow, this thing is cool!
Previous Next