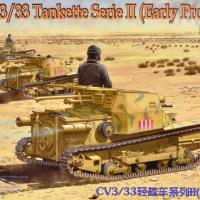 Developed from the British Carden Loyd Mark VI tankette in 1933, the Italian government commissioned Fiat and the Ansaldo Company to develop and produce a series of vehicles classified as Carro Veloce (CV), or "fast tank." After a brief run of 21 initial CV-29’s the design was recast in what became known as the CV-33, of which roughly 300 were produced. Seeing action in numerous smaller conflicts prior to World War II, the CV’s posed limited tactical value and were regularly outclassed by larger and more advanced fighting vehicles and anti-armor small arms.

Bronco brings a welcome addition for Italian armor aficionados with their new CV3/33 Tankette Serie II (Early Production). Although the subject is diminutive in stature, the kit is big on detail and count of tiny parts – just as we’ve come to expect from Bronco. Molded crisply in tan and clear styrene, the sprue trees number 7. A fret of photoetch and a sheet of decals are included, along with color instructions, including painting and marking guides for three finish options.

Many parts are unused, as they are clearly for use on other CV variants. Of the parts used, however, nearly half are dedicated to the fully detailed engine and crew compartments. The remaining balance of parts composes the hull, drive train, and armament. Featured are tiny link-and-length tracks – almost resembling ones from 1/72 medium and heavy tank kits.

This little gem promises to be a potential masterpiece in the collection of many an armor modeler. Given the delicate nature of the kit and the prevalence of small parts, I highly recommend it for modelers ranging in skill from advanced beginner to experienced. Just be sure to have your tweezers and optivisor on hand – and avoid the feared “carpet monster” and its appetite to devour small dropped parts.

Many thanks to Dragon USA for the review sample and to IPMS/USA for the opportunity to give it a first look!