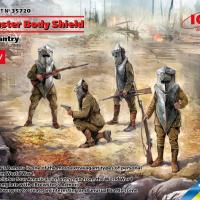 ICM continues its unique line of World War 1 related figure sets, and this one has to be unique in this regard, as it depicts equipment that never actually saw combat. The set provides four figures wearing the infamous Brewster Body Shield, designed by Dr. Guy. Brewster, capable of withstanding a hail of bullets from the standard .303 round of the time. Unfortunately, it was otherwise virtually impractical, as it weighed 40 pounds and restricted both vision and movement severely. The user could not turn his head, could not drop to the ground (and hope to get back up again), could barely reach his ammo belt under the unit, and was completely unprotected from the rear. Although studied by the U.S. Army at the time, it was never adopted for actual combat operations, although it might have proven useful for sentries or other fix posts.

All of this makes this set truly interesting – perhaps the first “what if” model from the First World War. The kit comes with four sprues – one for the figures themselves, two smaller ones with the body armor and a large sprue with U.S. Infantry equipment, most of which will not be used here. The figures themselves come in essentially two sets of two – two relatively static figures, and two “advancing on the enemy.” Because of its hypothetical nature, you can play a little bit with the set, as I did. I painted the two static figures (sentries) as per the box depiction, with little in the way of personal equipment other than weapons. The “advancing” figures I equipped as logically I could, giving them ammunition packs on the back for easy access, and making the assumption that such armor, if actually deployed, would be camouflaged in some manner. The base color (if painted) would probably be the same olive drab paint as used on their helmets, and the officer is depicted in this manner. The advancing soldier, however, has the dazzle paint scheme often used toward the end of the war. The only thing I added to any of the figures were slings for their weapons – otherwise they are out of the box.

Assembly requires that the figures are put together without the armor, which should be added after painting. Frankly, there’s not much point in spending a lot of time working on the faces as they are scarcely visible. Be cautious in assembly to make sure the arms do not interfere with the armor, so it’s good to have a single breastplate off the sprue to check fit.

After the figures are assembled and painted, then the armor should be added, breastplates followed by the helms. What you should have at this point are soldiers who look vaguely like the robots used in those cheesy 1930’s Flash Gordon serials. Come to that, maybe that’s where Dr. Brewster got the idea. Fascinating!

My figures are going into two dioramas, showing both the static and active use of this imaginary military unit. They’ll certainly serve as conversation starters for my growing World War 1 collection – something you really don’t see every day.

I applaud ICM for 1) still existing and continuing to make new and fascinating products, and 2) their willingness to provide something so unique to the hobby. I heartily recommend this set to anyone both interested in the First World War and hypothetical equipment in general. Truly something special!

My thanks to ICM for this lovely set and to IPMS/USA for a chance to add them to my collection. Stay safe, everyone, and happy modeling!