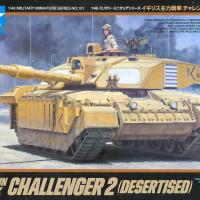 The British Main Battle Tank Challenger II entered service in 1994 as a significantly upgraded version of the successful Challenger. The tank saw extensive service in the 2nd Iraq War from 2003 and is still in service with the British Army – a new upgrade programme should see them in service until the mid-2030s.

This all-new kit from Tamiya features a desertised version of the Challenger II, depicting vehicles as they appeared in the Iraq War. As such, it features the blocky side skirts with canvas drapery that cut down on airborne sand, enhancing non-visibility, as well as the improved turret and combat identification panels to help prevent blue-on-blue errors.

Opening the standard sized box for Tamiya’s 1/48 armour kits revealed 5 parts trees holding around 160 parts, many of which are for the tracks. Also in the box were a flat metal weight, rubber plugs a length of dark brown thread (to make the tow cables) and a small decal sheet. All the parts were cleanly moulded in sand-coloured plastic with no flash or sink marks and limited – and hidden – pin marks.

While this kit in the 1/48 range has a plastic chassis, it does have a substantial metal weight to attach to the floor to give some heft to the finished model – this is held securely in place in the first stage of assembly. Once the road wheels were added, construction continued with the tracks. These are link-and-length plastic and cover all those parts of the tracks not covered by the substantial side skirts. The single links provided the only slightly awkward part of assembly, which was otherwise very straightforward. Once the tracks were completed, the hull top was added, followed by the side skirts that incorporate the lower canvas skirts designed to minimize kicked-up dust and sand. Various sub-assemblies, including very effective tow cables made with brown cord, complete the hull; attention then turned to the turret.

This assembly was simple and quick to construct, and features a one-piece gun barrel that can be assembled so that it elevates. A ¾-length figure is provided for the tank commander, though I didn’t use this well-cast piece, as I’m hopeless at figure painting.

The model was primed with Vallejo Air Bronze Green primer, and then painted with a mix of Vallejo Air acrylics to simulate the British Desert Sand paint. Once painted, the sparse decals were added, these representing a machine of the Royal Scots Dragoon Guards, based in Iraq in 2003. All went on easily after a warm water bath and settled down without any solutions; no silvering was noticed.

Weathering was started with a dark brown wash overall, with black on the engine deck, a little dry-brushing of very light sand, and finished with some light weathering powders on the sides and tracks. All was sealed with a coat of Dullcoat matt varnish.

I’m not a regular armour modeller, but this kit was simple and satisfying, taking just a few hours to build and only a few more to paint and weather. Tamiya have gone the extra mile to simplify construction, but the results belie the small parts count – detail is outstanding for the scale and construction is easy; the included weight adds a satisfying heft to the model. I enjoyed this kit and can thoroughly recommend it to all.

My sincere thanks to Tamiya USA for the review sample.