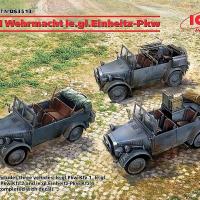 From Wikipedia: “Einheits-PKW der Wehrmacht-literally:standardized military (passenger) cars was the Nazi German plan for a new, multi-purpose fleet of four-wheel drive, off-road capable and light trucks, based on just three uniform chassis, specifically designed and built for the Wehrmacht, formulated in 1934, and built from 1936 to 1943.

The new, standardized military vehicles were intended to replace the diverse fleet of two-wheel drive, militarized civilian vehicles, previously procured by the Reichswehr, predecessor of the Wehrmacht – with new cross-country mobile vehicles up to military requirements, that should simplify logistics, maintenance and training, by the use of standardized components.

The three main classes: Leichter Einheits-PKW, Mittlerer Einheits-PKW and Schwerer Einheits-PKW (light, medium and heavy standardized cars) were planned to use uniform chassis and mechanics, firstly clustered by weight and payload, and each chassis would carry a number of different bodies for different purposes – similar to, but preceding the concepts of the U.S. Made Dodge WC series, or the later High-Mobility, Multipurpose Wheeled Vehicle (HMMWV / Humvee).

Because of the insufficiently developed German automotive industry at that time. German officials initiated the plan such that multiple small to medium size manufacturers should cooperate to manufacture the vehicles within each weight-class, supplying uniform components (chassis, engines, bodies) as much as possible. The program was however very ambitious (initially demanding not only independent suspension, but also four-wheel steering), and largely due to being overly complex, never came close to achieving its goals. As early as 1938 Ferdinand Porsche to develop a better light, standardized, and sufficiently off-road capable car, using as much of the Volkswagen as possible: the VW Kübelwagen.”

Modeling any of the variants of the Einheits-Pkw light standardized cars is much easier than you might imagine. ICM Holdings has issued several kits of the different marks of the Einheits-Pkw. They now have three versions of the same basic chassis in a convenient package and at significant savings over purchasing the three kits separately. Included in the boxing are the Kfz. 1 (standard personnel vehicle with soft top), Kfz. 2 (light radio communications vehicle) and the Kfz. 4 ( light anti-aircraft vehicle).

Construction begins with the chassis; frame rails, cross members, etc. are all molded as one piece which simplifies construction while still presenting the modeler with a detailed chassis. Suspension bits (differentials, axles, springs, two piece tires, etc.) fluff out that already elaborate chassis. I should note that the two piece tires/wheels are molded in plastic and come with 'baby moon' hub caps. Pleasant option.

Following those steps, the instruction have you begin building the engine and transmission. Super detailers will rejoice that with the addition of a few well placed ignition wires, etc. the engine and transmission become the proverbial model unto itself. Which is a bit of a shame as the completed engine assembly will be un-viewable once installed without some surgery of the kit parts (hood components). The transmission does extend into the driver compartment, so not a total loss.

The crew compartment floor pan is added next with various plastic bits (dash panel/firewall, side panels ,etc.) filling out the crew compartment. The interior does have some precise detail bits with ICM supplying parts for the gear shift, foot pedals, grab handles, crew seating, etc. There is even a part that appears to be a foot activated, engine starter switch. (Explain that to your grandchildren.) Completing the interior are four Mauser rifles with tie-down brackets integrated into the part.

The principal difference between the different marks of the le.gl.Einheits-Pkw is with the interior equipment. The light radio communications vehicle (Kfx. 2) adds the radio sets and mounting structure for that variant. Those radios are nicely molded with raised detail and parts and the appropriate antennas (either extended or retracted). ICM Holding does include decals for the dials but I found it easier to just hand paint them.

On the radio car version, I found it helpful to remove a molded support bracket from the driver side of the crew compartment floor (part# A28) in order to get the interior bulkhead parts(# E8/E9) to fit more better. Don't forget to nip off the tire support bracket on that same part (# A28), as noted in the assembly instructions.

The light anti-aircraft vehicle (Kfz. 4) exhibits a lovely, twin (Zwillingssockel 36) machine gun turret (available as a separate kit , #35584) that finds a home in the rear compartment of the standard vehicle. The three piece machine guns are mounted on a highly detailed gun mount. Ammo cans are molded separately and the machine gun mount has optional parts for either a stowed or deployed gun sight.

There are ammunition/stowage lockers either side of the rear compartment. In order to complete assembling those requires parts labeled as # E4 and # E8. On my review copy both of those parts are designated as # E4. Not a huge problem but do take note of the assembly instructions for the proper position of each part.

Of the parts specific to the anti-aircraft version are separate tripods for each machine gun should they had been dismounted from the vehicle. The three separate parts are molded such that they are in a stowed position and mounted on the rear deck of the gun compartment. A clever person could re-configure the parts and show them set-up outside the vehicle. ICM also provides a folding canopy ( in stowed position), late-style rear tail light and vehicle numbers brackets as well as a simplified spare tire mount.

Each vehicle comes with a decal sheet that features number plates for four separate vehicles with three marking options provided for the anti-aircraft version. . Additionally, there are tire pressure decals as well as individual unit markings and small decals for the dash board instruments. Curiously the decals provided for the number plates are oversized in relation to the parts to which they are supposed to be applied. Those decals may need to be trimmed before use.

These three, complete 1/35th scale, soft skinned vehicle kits of the le.gl. Einheits-Pkw. continues ICM Holding proclivity for re-purposing previously available kits in a newer and less costly configuration. A most welcome addition to the market.

Having had the pleasure of building several ICM Holding kits they tend to be a bit fiddly to build owing to all the small parts. Not to mention my fat fingers.... But when completed you're left with a beautiful, detailed scale model of the desired subject. This release is no different.

If you ever fancied building any sort of assembly line diorama or battle scene then this set of three vehicles is the way to go. This combination release would also facilitate showcasing all three vehicles on a road march....

off to the paint shop

shave off this bit for a betterr fit