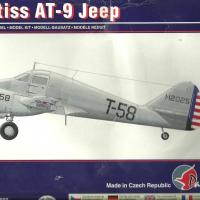 The Curtiss-Wright AT-9 Jeep was a twin engine advanced trainer aircraft used by the United States during World War II to bridge the gap between single engine trainers and twin engine combat aircraft. The AT-9 was a low wing cantilever monoplane configuration with retractable landing gear and two Lycoming R-680-8 radial engines.

It should be noted that this is a limited run kit, and as such is not up to the standards of a larger, mainstream injection molded kit manufacturer. Pavla produces kits of rare and unusual airplanes and other subjects. A mainstream manufacturer could never do this in an economical manner. As such the reader should understand that these limited run kits can be a challenge for even experienced modelers. On the other hand, it should also be noted that a skilled modeler can have a resulting model of something rare and unusual. This is proven out by the author of this review who did, indeed, create a fine representation of this airplane. Editor

The plastic is a soft, brittle neutral gray with an abundance of flash and the smaller parts have a tendency to break when they are cut from the sprue. The clear canopies, there are two of them, are vacuformed from very a thick and stiff plastic. Details are in the form of photo etch accompanied by cast resin with flash.

The photo etch includes seat belts; control columns with wheels; an instrument panel with rudder pedals; the face of the control console and other very small parts. In 1/72 scale these parts are extremely small and fragile. Resin parts are the engine face and four propeller blades.

After painting the PE seat belts I moved on to the very simple cockpit interior. The PE face of the center console was not long enough to fit the plastic piece. I super glued the instrument panel to the front edge of that console and when I was ready to glue the cockpit floor assembly into the right fuselage I found that the PE instrument panel was too wide for the inside of the fuselage. And then it broke loose from the front of the console. I then decided to leave this part out altogether.

Before gluing the fuselage halves together they had to be trimmed of flash and the mating surfaces sanded smooth.

The wing pieces were very thick and had no taper from the fuselage to the wing tips. There was an obstruction on the inside of each wing piece that had to ground down with a Dremel tool. The wings and stabilizers had no tongue and slot to help locate them. The edges had to be sanded flat with a sanding stick and then glued into place using tube glue. A large amount of filler was then required to close the resulting gaps.

The assembly arrangement of the engine to a round bulkhead with a landing gear leg mounted on the opposite side would have worked out just fine if the pieces had fit correctly. But, when the cowling halves were glued together the resin engine did not fit. The cylinder heads needed sanding to obtain a good fit.

The vacuform canopy was not shaped like the opening on the fuselage. Unfortunately, I ruined the first one trying to get it to fit. In the end I had to reshape the opening for the canopy for a good fit. This resulted in not enough edge surfaces for the canopy to stay in place. I was aware of this before the fuselage halves were put together so I placed thin Evergreen strips at the top inside of the fuselage leaving just enough for the canopy to rest on but not enough to be seen through the clear panels. I set the canopy in place and gently taped it down and used super glue, sparingly, to hold it. It’s not pretty, but it works.

The kits decal set was good. They are very thin and don’t show any film around the edges. However the red, white and blue stripes on the rudder didn’t fit well so you may want to paint them instead.

This kit is only recommended for highly skilled modelers who wish to add something unusual to his or her collection.

Thanks to Pavla and IPMS-USA for this opportunity to test my modeling skills.