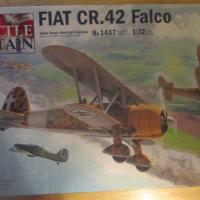 The Fiat CR-42 was a development of the CR-32 biplane fighter designed by the noted Italian designer Celistino Rosatelli. It first appeared in 1938, and featured an 846 hp. Fiat A.74 radial engine and a “warren truss” wing strut arrangement instead of the usual biplane arrangement. The plane was all metal with mostly fabric covering, and was armed with two 12.7 mm Breda SAFAT machine guns firing through the propeller arc. The idea was to produce a fast, light, highly maneuverable fighter that coupe compete with the monoplane fighters then being produced by other European countries. It was better than nearly all of the biplanes then in service, but of course was outclassed by the more modern monoplane fighters then being introduced.

The CR-42 was produced in large numbers, and used as a standard day fighter until replaced by more modern equipment. Then, it was used for ground attack, night fighting and ground attack, and anti-partisan roles. It was also exported to Sweden, Belgium, Hungary, and the German Luftwaffe, and remained in limited production until 1944.

There are numerous reference works covering the history of the CR-42. One of the best is the Squadron “In Action” #172. In addition, the old Profile Publications #16 gives a good account of the plane’s career, and both works provide good color scheme coverage.

The instructions consist of ten pages, including a title page, a background history in 6 languages, and a lawyers’ account of the dangers of letting your younger kids try to build the kit. This is followed by a sprue diagram and color guide, 8 assembly drawings, and six-color four view drawings showing the versions that can be built using kit decals.

This kit has been produced in several versions. I reviewed the kit in 2008, and looking at the instruction sheets of both kits, the new one has only a few parts not included in the earlier versions, including several landing gear arrangements replacing the standard wheel pants version.

The molding is very high quality, and highly detailed, and is certainly better than the old Revell kit, which came out in the 60’s. Other than the landing gear and external bomb racks and other add-ons, a CR-42 is a CR-42, so there isn’t much you can do to modify the kit, although the Hungarians did modify one with a larger radial engine, a Manfred Weiss WMK-14A variant of the French Gnome Rhone 14K.

The cockpit interior is highly detailed, containing 9 parts, and fits snugly into the mounting receptacles in the fuselage. The engine is highly detailed, consisting of two cylinder banks, a very nice exhaust stack arrangement, and a four piece cowling that encloses the whole thing. One problem is that they neglected to take care of is that the propeller, while nicely done, has the curved portion of their airfoil pointing to the rear, whereas it should be facing to the front. If you look at any airplane propeller, you will notice that the front of the blade is a curved airfoil, which provides the thrust forward, while the rear faces are flat. I have seen some kits where the makers have made this change, but Italeri chose not to. But it is still a nice prop.

The kit includes decals for 6 aircraft, including 2 from units operating in Belgium during the Battle of Britain, and four based in Libya in 1940 and 1941. These are high quality decals, and go on nicely without trimming.

For the most part, the kit goes together without any real problems. When I first built this kit in 2008, I had problems with the wing strut structure. The struts are quite intricate, and consist of a four part cabane strut arrangement, and four outer “warren truss” struts on each wing. These have little holes provided for them in the wings and the fuselage, and the struts have little knobs which are supposed to fit in the small holes. I had a lot of trouble getting the struts to attach in the right positions, and I think part of the problem was that when I attached the lower wings to the fuselage, I did not add enough dihedral. There was no drawing in the instructions to show the exact dihedral angle, and the wings attach very firmly to the fuselage, making this adjustment difficult. The instructions say to attach all of the struts to the upper wing, and then glue them to the rest of the airplane. It can be done, but it ain’t easy. Of course, the model should be completely painted before the upper wing is attached.

One advantage of this kind of biplane is that there is very little rigging, only an “X” bracing of wire in between the outboard struts. This will take all of five minutes to do, and when you finish this, you are done.

All in all, this is a much better kit than the old Revell model, and aside from the wing strut difficulty, makes into a much more realistic model. Don’t be afraid of this one, but be very careful in mounting the upper wing. Highly recommended with reservations.

For a more detailed account of the kit assembly, check my review of 4 June 2008. This is still true today, as the kit is basically unchanged.