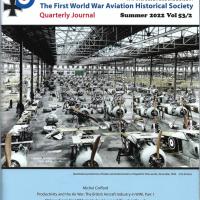 The Summer 2022 journal of Cross & Cockade International features a nice sharp photograph of Sopwith Snipes and Salamanders on the production floor on December 1918. The inside rear cover reveals two photographs of the stripped remains of two AEG C.IVs captured in Palestine. The rear cover has five color profiles of Michel Coiffard’s aircraft by David Méchin. These illustrations support the first article on Michel Coiffard. The center section, The Gazetteer, consists of eleven black and white photos, and ten black and white maps. Also included is a separate folded color 1/100,000 map consisting of eight pages when folded up. This issue’s map focuses on Independence Force and Royal Engineers (Germany) Flying Sites.

David Méchin is up first with a biography of Michel Coiffard, a 34 victory French ace who specialized in shooting down observation balloons. Although this may sound easy, it wasn’t since observation balloons were heavily defended. This 16-page article includes 34 black and white photos and contains many first person accounts. The photograph on Page 53-078 shows off Michel Coiffard and his dog behind the fuselage artwork on his Nieuport 24bis (No. 4451) in late 1917. Coiffard’s final mission on October 28, 1918. Supported only by his wingman, the two pilots took on five Fokker D.VIIs with Coiffard downing one. The ensuing melee saw Coiffard take a bullet through his chest and lung as well as his arm. Escorted by his wingman Second Lieutenant Condemine, Coiffard made it back to his base and landed his SPAD, but subsequently passed from his wounds. The article includes a list of Michel Coiffard’s confirmed victories.

Hal Wilson chimes in next with the first part of a dissertation on the Productivity and the Air War: The British Aircraft Industry in WWI. This eight-page feature includes two black and white photographs. The article specifically addresses quantitative vs qualitative productivity improvements. In fact you will see both words (quantitative, qualitative) bolded throughout. The late Stewart K. Taylor is back with a fifteen-page, 23-photograph, biography on Canadian Lt Herbert Leonard ‘Roughie’ Rough. There are several first-person accounts in the form of letters home to family from other members in Rough’s unit along with an actual interview from Rough by Stewart K. Taylor. This biography also serves as a primer on the performance of the DH-4 in service as well as the introduction into service of the DH-9 (as seen on Page 53.113). Notably one can see the bomb carriers under the fuselage and an additional four bomb carriers under the lower wing.

The Air War in the Southern Caucasus by Peter Dye follows with a focus on aerial reconnaissance in the eastern Ottoman Provinces. This nine-page feature includes twenty-five black and white photographs, three maps, and two tables. Page 53-116 shows a German observer with a handheld F.K.II oblique camera that produced high quality vertical and oblique images. Below that is a Fliegerkammer F.K. I camera that was introduced in 1912 and in widespread use in aircraft by 1916. The photograph on the upper right of the page shows an Ottoman pilot with a German observer during training in Germany. The first installment of Richard Chancellor’s feature on Tom Owen is up next. This 16-page article includes twenty-five black and white photographs. A nice photograph of a Maurice Farman Se.11 is on Page 53-125 as the crew prepares to start the engine.

Mick Davis compiles three letters to the editor in Fabric. The first letter follows up on Palestine AEG IVs. A Curtiss JN-3 crash report is up next. A WWI propeller blade was recently found in Cephalonia. The accompanied photograph hopes to help gain some additional information. 4Joe Moran highlights market news and Bob Gladding builds a Choroszy 1/72 resin Salmson 2A2 in 24th Aero Squadron markings. Joe Moran builds two Valom 1/144 Pfalz D.IIIa in Jasta 7 and Jasta 18 markings. A photograph of a scratch-built 1/500 HMS Ben-My-Chree with a Short 184 on the fan deck is included from Adrian Roberts. The Bookshelf section is a review of WWI aviation specific books and magazines with this issue totaling fourteen.

As usual, this is another excellent issue from Cross & Cockade and I am always impressed with the quality of the articles, both from a research perspective, and readability. The period pictures, maps, and drawings in this journal come off looking great thanks to their printing on the journal's glossy paper. If you are into early / WWI aviation; this journal is an incredible source of information that will have you on the edge of your seat waiting for the next issue. My thanks to Cross & Cockade International and IPMS/USA for the chance to review this great issue.