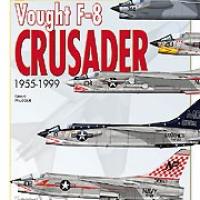 This publication is offered in an 8” by 9 ½” size soft cover, with full color images on almost all pages, with a few black-and-white images interspersed. All of the images are of fine, clear quality. There are 84 pages in all, each filled with informational narrative or images of the Crusader. The text has been translated from French which has resulted In a few interesting misspellings.

The first few pages include narrative on the design, development and flight testing of the aircraft. Several paragraphs address the prototypes, followed by a brief history of the deployments and records set by the Crusader. Interestingly the Crusader was the first jet-powered aircraft to fly supersonic on its maiden flight. I can still remember seeing an artist’s drawing (Popular Science??) of a Crusader accidentally launching from an aircraft carrier with its wings folded! It is true, in fact this feat was performed intentionally six more times, with one such test being performed with a full weapons load.

The US Navy F8 Squadrons are addressed with color profiles showing the various colorful markings is next, followed by F8 Squadron of the USMC. In addition there are several color profiles of aircraft from the Naval Air Test Center, Naval Air Test Facility, Naval Missile Center, Naval Weapons Center at China Lake, and Naval Test Pilot School. This is followed by profiles of Crusaders assigned to the USN and USMC Reconnaissance Squadrons.

The Crusader was often referred to as the “last gunfighter” and “MiG killer” during the Viet Nam war with 18 kills, or 53% of the USN aerial kills. The Crusader was armed with four 20 mm cannon and could carry four Sidewinder missiles, plus bombs or Bullpups carried on wing pylons starting with the F8E version. The Crusader was also designed with a ventral tray housing 32 2.75 inch rockets. The use of this last feature was abandoned and the tray was sealed closed.

Overall this book is quite informative and will offer an excellent resource for modelers looking to build a colorful or uniquely painted Crusader. Highly recommended.

Thanks to Casement Publishers and IPMS/USA for the opportunity to review this fine publication.