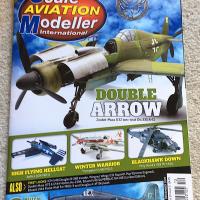 IPMS/USA appreciates the opportunity to review this periodical and report on the content!

OK, I am one of “those guys” who really enjoys reading periodicals/magazines. They provide a method to weed out the potential poorly manufactured models out there (a rare occurrence these days with modern molding techniques) and highlight the benefit of a given kit. A win for me as I therefore know of and don’t buy poorly executed plastic. And if I do, it’s because it saves me a lot of scratch building. Plus, I learn a lot of technique and history from modeling. What is not to like?

My first experience with hard-core modeling magazines was the few produced here in the United States in the late 1960’s. Royal Air Force Review, a predecessor to many of the magazines currently produced in the UK, was difficult for me to obtain. I distinctly remember a German F-104G being launched on a “Zero Length Launcher” as a cover feature on one of them. (I wonder if it’s in the stash out there?) After finding magazines like the now-defunct Scale Modeler, and the occasional UK magazine sold for book-like prices in what used to be bookstores, I determined there were others like myself who were attempting to do a better job than the kid down the street who always seemed to have plenty of support and cash for his hobby.

I learned about IPMS USA, read the R/C modeling magazines as well (now there’s a hobby that can eat your paycheck), and learned of UK magazines. Some specialty magazines began to feature major reviews and modifications, and those still exist in one form or another today.

Fast forward to this issue of Scale Aviation Modeller International. The cover features the Zoukei Mura 1/32 DO-335 “double arrow” two seat review item, and the builder did a really great job of a complex kit with masterful airbrush work. The review went in to a lot of “how” detail with decent photos for those of us interested in the kit.

Two other aircraft share time on the cover… Airfix’s 1/24 Hellcat (you have to see it to believe it) and a Trumpeter MIG-3. The second item seems to be a scale down of their 1/32 kit and is painted in the attractive red-wing with white snow distemper effort. Both are excellent short tomes with sufficient detail to make me interested in building one and acquiring the other.

The last major photo is the one I was interested most in… IPMS’ own Floyd Werner’s build of the Kitty Hawk 1/35 MH-60L…. just seriously well researched, presented, and done, I might add.

Surreal detail and effort obviously went into this kit and Floyd’s review of the build along with corrections (and of course, a quiet nod toward his resin improvement could not be bypassed). All is forgiven, as the final result is I now have a “free” list of improvements for the Lima I intend to build one of these days. A grand review, Floyd!

The much reported on F6-F hellcat is touted and included as eight profiles, along with the usual list of new releases and book reviews. These I find particularly worth my time to peruse.

And on the cover, the sales line: “New Look” as a corner banner. Fortunately it was not the radical “new look” that some magazines have taken, where four or five subjects are highlighted, photos splashed edge to edge, and little to no narrative.

A Note here: I don’t personally care for the “Cleaned up” look that seems to be taking over the current Magazines out on the news-stands. I buy and read a magazine because I read and learn, and the photos support the effort. In this case, this particular magazine (and one other from the UK with a very similar name) meets my requirement for sufficient editorial content along with photographic excellence. There are others (one which starts with an M) which are able to provide wide-spread photography with sufficient notes to describe what is going on, particularly with aftermarket and scratchbuilt details.

All it all, I understand marketing. But sometimes that Marketing fails with me. In this case, SAMi (as it is described) still scratches the itch… and so far I look for it and two other magazines to coerce me from my hard earned dollars. Well done SAMi and thank you from me and IPMS USA for providing us an excellent magazine to review!