Colors of the Falcons: Soviet Aircraft Camouflage and Markings in World War II 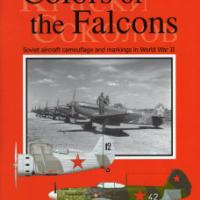 Iliad Design is a new company for us. I would like to thank them for submitting this book for review.

Many modelers are familiar with the camouflage patterns of WW II U.S., British, German, and Japanese aircraft. However, until the first publication of Colors of the Falcons in 2006, the camouflage patterns used by the Soviets were not as well known. Because of this lack of knowledge and subsequent demand for the book, it is now in its second printing.

Colors of the Falcons is a paperback book measuring 8-1/2” X 11” and consisting of 56 pages. The cover and pages are printed on high gloss paper. The book contains approximately 82 black and white photographs with accompanying text. There are four color plates depicting 20 different aircraft in various camouflage patterns. These 20 aircraft are only shown in profile. It certainly would be beneficial to see the patterns also displayed in a plan view. The plates are beautifully done, neat and precise. Accompanying each illustration is a description of the pattern shown.

The text is a chronological presentation of the camouflage patterns and colors used on Soviet aircraft from pre-WW II to just past 1945. During this time, the authors describe the constant changes in color and paint type. There are sections covering the Soviet naval aircraft and the aircraft from the Lend-Lease program. Of particular interest is the section on interior finishes.

Throughout the book, the many colors and finishes used by the Soviets are referred to by their Soviet designations. Fortunately for the reader, these are summarized in a table at the end of the book. The table consists of three columns listing the Soviet color code, the approximate FS equivalent, and descriptive comments. This table will be extremely helpful.

Another useful section is a series of small black and white line drawings depicting various aircraft in three and four color camouflage patters. Each aircraft is viewed from the left side, right side and top. The three pages of drawings are reproduced from the official 1943 and 1945 VVS (military air force) camouflage orders.

There is no doubt this book will be well received by modelers of Soviet WW II aircraft. The material presented in Colors of the Falcons will transfer very easily to the many kits on the market today. By using the information provided in this book the modeler is no longer confined to the camouflage patterns provide in the kits’ instructions. I consider this book to be very desirable and a “must purchase”. Highly Recommended.

My sincere thanks go to Iliad Designs for providing this wonderful book to IPMS/USA and to IPMS/USA for allowing me to review it.