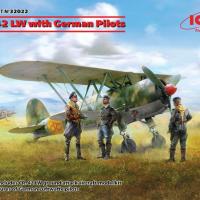 ICM has lately really gotten into making combo kits, and this one, which combines their excellent CR. 42 Night Raider with their equally excellent German pilots set, is one of the latest. I will review each item separately, so let’s start with the airplane.

As most of you already know, the Italian CR. 42 biplane was perhaps one of the most elegant aircraft of its day. Late in the war, however, its obsolescence as a front-line fighter was painfully obvious, and both the Italians and Germans saw its potential as a night intruder for harassing the enemy under conditions where it was unlikely to encounter much, if any, aerial resistance. This involved some modifications, such as adding bomb racks, extending the engine exhausts and cutting down the landing gear spats to deal with rough field conditions.

Assembly begins with the interior, and ICM has done a nice job creating the delicate aluminum framework of the original as well as the interesting split control panel. As with all ICM kits of this scale, no attempt has been made to include seat belts, so those will either have to be found elsewhere or scratched. All dials on the various bits of control panel are reproduced in decal form, and certainly simplify the painting process. Realistically, there isn’t anything else you may want to add except for the belts.

The engine assembly is a model in and of itself, and looks fine as is, although it’s a simple enough task to add some wiring for better effect. You can elect to show the cowl flaps open or shut, and you also have the option of leaving a number of panels open. I opted to leave them ALL off just to show the quality of the molding.

Biplanes offer a number of challenges, one of which is how best to paint the struts with a minimum of masking. I discovered, that if one takes a little time, all of the interplane struts can be assembled onto the upper wing exclusively in such a fashion that they will essentially snap into place onto the fuselage and lower wing after painting, which saves an enormous amount of masking. There is also a relatively limited amount of rigging for a biplane, and this can be tackled in any number of ways – your choice. Nothing too difficult for the average modeler. Be sure to punch out the mounting holes for the bomb racks on the lower wings before assembly, however.

Assembly of the fuselage and various appendages is extremely precise and required next to no putty to finish the job. About the only thing that might require a bit of care is the attachment of the extended exhaust pipes, which are braced with a couple of very thin struts. Fortunately, there is a complete second set of these included in case yours snap.

If everything is assembled properly, you’ll find that the engine virtually clicks into place on the fuselage, which permits you to paint this subassembly separately if you so wish.

The fun part of this kit has to be in the painting. If you’re comfortable with an airbrush, you’ll find this a great kit to test your skills on. Two decal options are provided, and as is typical with ICM, are a breeze to put on and set with virtually no film. You will, of course, have to scrounge tail swastikas from another source.

Although I’m not a big fan of what the Germans did to this elegant aircraft in the name of efficiency, I have to admit the final product is really interesting to look at. I don’t have anything in my collection quite like it. All in all, a wonderful kit with few, if any, vices.

The German pilot set is, I believe, one of the first pilot sets released by ICM some years back. Unlike most of their newer sets, the three figures depicted do not, technically, work as a vignette. Basically, what you get is three pilots in three different uniforms standing around looking Teutonic. The fact that they all have basically the same face doesn’t help either (triplets?). Your best bet is to display them with three different aircraft rather than all together.

That being said, they are truly lovely figures in their own right, with beautiful detail and good, natural poses. They assemble easily with little putty, paint up exceptionally well and really look the part when complete.

Once again, ICM has come up with a lovely combo kit featuring top-notch kits. As I stated in a previous review, I think ICM is missing an opportunity by not providing additional decal options for their regular CR. 42 kit, which would make this set even more desirable. Still, it’s a bargain for such excellent kits. Highly recommended.

As always, my thanks to ICM for releasing such wonderful models, and to IPMS/USA for entrusting me to build and review them. Stay safe, everyone, and happy modeling!

Aircraft with figures
Previous Next