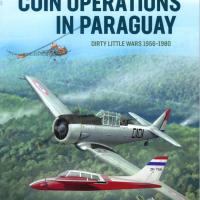 Helion is a UK based company that produces books on many aspects of Military History from the Late Medieval period through to the present day. Helion was established in 1996, and since then they have published almost 1,200 books, with 100 or more new titles coming out every year for readers around the world.

Antonio Luis Sapienza Fracchia was born in Asunción, Paraguay on 14th May 1960. He graduated from the Catholic University of Asunción where he got a B.A. in Clinical Psychology. He also took specialized English courses at Tulane University of New Orleans, Louisiana, USA and San Diego State University in California. He is at present an English Teacher and one of the Academic Coordinators at the Centro Cultural Paraguayo-Americano (CCPA), a binational institute in Asunción. Married with two children, he resides in the capital. In his function as an aviation historian, Sapienza became a founding member of the Instituto Paraguayo de Historia Aeronáutica “Silvio Pettirossi”, and wrote more than 500 related articles for specialized press around the world. Sapienza has received five decorations for his academic merits, and published eleven books. This is his third instalment for Helion.

Helion’s latest book in the Latin America @ War series is a square back soft cover includes 72 gloss paper pages. The front cover features a color illustration by Paul Hewitt. The North American AT-6C was the first of three acquired in 1943 through Lend-Lease Program. They were armed with a 7.62mm machine gun mounted in the right cowling and a Browning M2 in the rear cockpit. Hardpoints on the wing provided the capability to add four 100-lb general purpose bombs. The Bell 47G-2 helicopter turning away in the background were also used extensively in COIN missions. The Tom Cooper color side profile of a Cessna 310H can also be found on Page 32iii. This Cessna was acquired for presidential transport, but actually saw quite a bit of deployment in COIN operations. Both the AT-6C and the Bell 47G are featured as side profiles on the rear cover. I counted 190 black and white photographs, and 5 color photos. There are also eighteen aviation color side profiles by Tom Cooper, Luca Canossa, Anderson Subtil, and Gordon Sudar. There are two black and white maps by Antonio Luis Sapienza and three full color maps by Anderson Subtil.

Antonio Luis Sapienza kicks off this volume after the end of the Paraguayan Civil War of 1947 and for all practical purposes the era of Alfredo Stoessner. The battle lines were basically between the conservative Colorado Party and multiple communist parties. A successful General in this Civil War, Alfredo Stoessner laid the foundation for a coup d’état on May 4th, 1954. A provisional government was installed; and headed by Tomas Romero Pereira until Alfredo Stoessner was elected president in the 1954 general election. Stoessner’s 35-year dictatorship lasted until his overthrow in 1989 from a split within his own party. Emboldened by Fidel Castro’s overthrow of the Cuban government in 1959, many far left communist groups attempted to replicate Castro’s success in Paraguay.

Chapter Two lays the groundwork for the Paraguayan Armed Forces, consisting of the Army, Navy, Air Force, and Police. The United States provided support, often in the form of Lend-Lease, but much of what Paraguay requested was never approved. In the end, Paraguay made effective use of what they did receive, keeping communism out of Paraguay until the election of 2008. Page 11 depicts several of the four C-47 Skytrains that were provided, along with a Bell 47G2 and a Beechcraft A35 Bonanza.

Chapters Three and Four cover the leftist communist groups, The M14-V Group, and FULNA. Communist parties were considered foreign interference and illegal in Paraguay, so many of the planning activities originated with college radicals in Argentina. A Noorduyn UC-64A Norseman is shown on Page 27, that served as an air ambulance. This particular aircraft appears to bear a nickname of Curupayty, possibly a reference to the Battle of Curupayty in the Paraguayan war of 1866. This battle saw 11,000 Brazilians and 7,000 Argentines attack 5,00 defending Paraguayan troops with the end result of 50 Paraguayan troops killed as opposed to some 9.000 Brazilians and Argentines who lost their life. Three North American AT-6C Texans were in the Paraguayan Air Force with at least one shown at the top of Page 44. The left photograph depicts Lieutenant PAM Gomez Puig with the right photograph showing Lieutenant PAM Nicolas Aparicio. The two pictures at the bottom of the page show off at least one of the two Consolidated PBY-5A Catalinas that made it to Paraguay in 1955

Chapter Five addresses the next generation to attack the Stoessner regime that arose from the Catholic church and universities. Ostensibly distancing themselves from the illegal Communist Party, they soon embraced their communist roots and called for armed rebellion through the Organizacion Primero de Marzo (First of March Organization). Supported by the United States, the government response was swift, eliminating the attempted rebellion. The Catholic communes soon disappeared and many communist supporting college students sought refuge in Argentina.

Activist Augustin Goiburu’s story is revealed in Chapter Six. Although born in Paraguay, Goiburu spent much of his resistance to Stoessner outside of Paraguay. A planned attack with a bomb-laden van in cooperation with Argentine college students failed, but Goiburu managed to become Paraguay’s Public Enemy Number One as a result. He finally fell victim to the United States’ Operation Condor and was captured in Argentina. Goiburu was never seen again after being turned over to Paraguayan authorities.

Chapter Eight discusses the assassination of the exiled Nicaraguan president, Anastasio Somoza Debayle, since it happened on Paraguayan soil. Five photographs are shown on Page 58 detailing what was left of Debayle’s Mercedes-Benz S-Class after the Chinese RPG-7 grenade launcher, in addition to the Chevrolet C10 pick up truck that the Sandinistas based their attack on.

I was only vaguely aware of this period of communist rebellion in Paraguay and found this book quite interesting. One section that really capsulates the failures of the communist activists details Victoriano ‘Centu’ Centurion, a former retail grocer. Centurion became enamored with the Paraguayan Catholic church’s communist doctrines. Centurion became legendary among the Catholic communes as he “believed his body was immune to bullets, that he possessed the gift of invisibility, and he heard divine voices of premonition.” Although a lot of members of the commune died, Centurion, true to his beliefs, was able to survive, hiding in the Panamanian Embassy in Paraguay.

Antonio Luis Sapienza has jammed a lot of information into this volume, but I still enjoyed the read and was able to finish it over three evenings. The period black and white photographs are all quite interesting and are well captioned. The color illustrations from Tom Cooper and Anderson Subtil are great [Page 32iv]. I’ve looked on the Helion website and there are two other volumes on Paraguay, both by Antonio Luis Sapenza, that I will be ordering. If you own any of the previous releases in the Helion @ War series, you know what you are getting. If this is your initial entry into this series, you will be pleased.