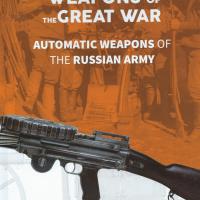 This book describes the machine guns, automatic rifles, handguns and revolvers, including both the official weapons in service in the Russian Army in 1914-1917 and other weapons not officially approved but nevertheless used by the troops such as obsolete Russian and non-Russian arms both supplied by the allies or captured from the enemies.

A special highlight of this book is the section describing experimental automatic weapons, without which the reader would hardly get the big picture of the state of the Russian defence engineering developments in the early 20th century. For each weapon described in the book, there is a brief history of how it was designed and started to be used as an approved army weapon and a description of the key modifications made to it throughout the period of its manufacturing. This book contains a detailed and meticulous in-service description of the field use, strengths and weaknesses of the weapon seen through the eyes of the soldiers. It is the first book written by a Russian weapons history researcher providing a detailed description of machine gun system parts such as mounts, carriers and pack equipment. This book also contains unique information on flare guns and special accessories.

I found this book to be quite interesting in its thorough research and presentation. Materials from archives and early 20th century publications such as professional weapons and engineering publications and sources were used. Photographs came from museum displays as well as private collections, many unpublished until this book’s release.

After a brief Introduction, the book breaks down through the following chapters:

The first chapter is probably the broadest in its scope – going into brief descriptions of the many different types of automatic weapons including the manufacturing, mechanical descriptions, field testing, and performance data for many of them. The photos contain well-written captions that are wellsprings of excellent information.

The rifles in the chapter include:

The chapter concludes with footnotes, and then design drawings and museum close-up photos of many of the mentioned rifles, including bayonets and in some cases, use of Japanese ammo magazines.

Subsequent chapters are much more specific in scope, but basically follow the same format. Each chapter begins with a section describing the history and development of each gun, basic design and operation, ammunition, use in 1914-1917, and subsequent uses. Where applicable, information is provided on additional topics such as various modifications and mounts (some were mounted in aircraft, as well as on armored vehicles and with the infantry). The chapter on the iconic Maxim is easily the most extensive in the entire book- with thorough narrative on the Major General Sokolov mounts and the Kolesnikov Mounts, which had further aircraft and anti-aircraft iterations. A particularly chilling photo is of Emperor Nicolas II saluting a machine gun crew with his son, the Grand Prince Alexei Nikolaievich and wife Alexandra. Near them is a 1:2 model of the Maxim used for training the Grand Prince in machine gun operations. The book is filled with similar gems, such as the fact that the cartridges for the Schwarzlose gun needed to be lubricated before entry into the breech to avoid jamming. In some cases, various models of the guns in the book ended up being used by the Wehrmacht in the subsequent world war.

Overall the book is quite informative– there is definitely quite a load of technical information to get caught up in, but one can skim through all that and still get some useful knowledge from the book. The book serves as a useful resource for the novice such as myself and the aficionado gathering research. The period photos lead to many ideas for scenes for your models (like the motorcycle-mounted anti-aircraft gun photo) and the museum photos give excellent color references (if museum paint jobs are to be trusted). Whether you are detailing a larger scale figure, an armor kit from either war, or even one of your Wingnut Wings kit machine guns, anyone modeling WWI will find something useful in this book—a worthy library add!

My thanks go to MMP Books, and IPMS-USA for the review sample.