From Bessarabia to Belgrade. An Illustrated Study of the Soviet Conquest of Southeast Europe. March – October 1944 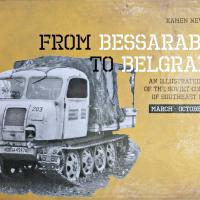 Thanks to Casemate Publishing & IPMS/USA for the review copy!

The rapid Russian army takeover of Southeast Europe in 1944 is a seldom-covered topic, but its importance loomed huge for the Cold War and the fates of those countries to this very day. Kamen Nevenkin presents viewpoints of the events from German, Russian and the countries involved perspectives. This book shows the realities of war on the Southeastern Front, where nations changed allegiances, national boundaries were redrawn, and the Soviet expansion was inexorable. Numerous photographs show the conduct and aftermath of brutal battles, and are not for the faint-hearted. This book is an excellent primer on this little-known, forgotten theatre of WW2.

Kamen Nevenkin is a native of Sofia, Bulgaria, and has devoted his research and writing to the Eastern Front in 1944-1945. His writings use a balanced approach, showing the viewpoints of both sides in a frank and uncompromising manner, befitting its subject.

From Bessarabia to Belgrade is a hardbound book 8 ½ tall X 11 3/8 wide with 152 pages. Unusually, the spine is printed in the opposite direction of the covers and text. The book is simple: Title and Table of Contents are one page (both sides, followed by four chapters:

The final page is a list of Sources – there is no Index. The book is chock-full of 155 B&W photographs of varying quality. 74 photos are full-page, making up for the poor quality of some photos. There were several instances of the same vignette covered by 3-4 photos. The photos show many unusual vehicles such as Italian tanks, tracked transports, motorcycles, an armored train and crashed aircraft in addition to the usual German and Russian armor. The appearance of armor in battles and active use gives modelers many new, realistic ideas for dioramas. Thirteen tables listed force compositions, losses and captures. The text suddenly ends on page 121, with the 30 pages of full-page photos.

The book is written with a running narrative by the author of events, interspersed with you-were-there perspectives by a wide range of persons – soldiers, pilots, correspondents, Field Marshalls. In other words, you read what really happened to gropos (ground pounders) from the gropos themselves, along with the author’s narrative to continue the storyline. The reader gets a real taste of the mud, dust, blood, sweat and fear felt by both sides, mostly by the Germans. There were many tidbits of unusual information, such as this front being the first foreign soil (Romania) entered by Soviet forces in WW2. The political machinations of each country were summarized, something seldom discussed. The reader is sucked into wanting to finish the book in one sitting to get to the end of the horror. This is an impactful book.

In summary, this book was surprisingly simple, brutal and mesmerizing. The photos and personal accounts from both sides made you feel like you were there. The length was enough to get a fairly detailed view of the events, but not get bogged down in minutiae or details, making for easy reading. But the subject matter is worth knowing about how this area of the world was turned upside down for decades after WW2, and still to this day set up the continuing strife in some of these areas. Recommended reading if you want to know the gory details of the Russian obliteration of the southern Eastern front starting in 1944, if you want to see how people lived and died at that time (both military and the populace), and for many factual appearances of armored vehicles that are precious for modelers.

Thanks to IPMSUSA for the privilege of reviewing this illuminating, impactful look into a little-seen topic.