British Aircraft of World War One 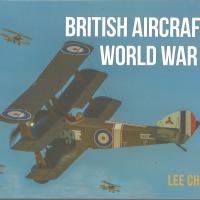 The title of this publication is, “British Aircraft of World War One: A Photographic Guide to Modern Survivors, Replicas, and Reproductions".

It is, indeed, a photographic guide. Every page of the 128 pages in the book contains at least one photograph. Some of the images are of aircraft that date back to World War I, those being the Survivors. Also covered in text and photographs are replica aircraft and reproductions. In the “Author’s Note, definitions of these three types of aircraft are provided. In short, original aircraft are those which contain a “significant number” of original parts, although much of the aircraft may have been restored. “Reproductions” are defined as newly build aircraft which were constructed using similar materials and building methods. A replica appears to be an original aircraft but on closer inspection has parts and gear that are fairly modern, and certainly not original.

As an early aviation enthusiast, I found the text to be interesting, including facts about specific aircraft. Included in some cases were paragraphs describing improvements made to aircraft and gear as World War I continued. In some cases, brief stories of crew members were shared. An example is found on page 33 in which 2nd Lt Vincent Waterfall and his navigator, Lt Charles George Gordon Bayly are mentioned. They took off in an Avro 504 which, as it turned out, was the first British aircraft shot down by the Central Powers in the Great War. I mention this particular aircraft because I recognized the aircraft and the museum in which it is displayed when I studied the image. Just a few years prior to the publication date of this book (2021) I had visited the museum in Hendon and remembered seeing the museum and that particular aircraft during my visit.

As a modeler who enjoys building aircraft of this time period, I found the photographs extremely useful. Images clearly show cockpit details, rigging details, close-up images of motors, propellers, weaponry, and other aspects of the aircraft. The book is not only an intriguing “read” but is also a very useful “resource” tool for those who wish to add detail to their WWI aircraft.

This publication is highly recommended due to the high quality of the many images, good range of subject aircraft that were photographed, detailed images of high quality, all accompanied by interesting text.