King of Fighters, Volume 2: The Monoplane Era: Nikolay Polikarpov and his Aircraft Designs 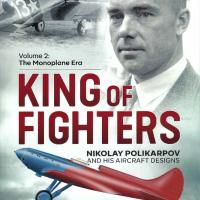 Mikhail Maslov was born in 1954 in Mary, Turkmenistan, at that time a part of the Soviet Union. His aviation career started during his school years when he became interested in aviation history and began building aircraft models. Mikhail graduated from the Moscow Aviation Institute (University) and worked as an engineer at the Tupolev Design Bureau, participating in the development of the Tu-204 airliner, and later at the Central Aero and Hydrodynamics Institute (TsAGI) as researcher. However, his passion for aviation history prevailed and in 1992 he transferred to the TsaGI museum in Moscow where he began his historical research. Since the beginning of the 1990s Mikhail has been actively involved in the restoration of Soviet aircraft to flying condition, and has participated in building I-153, I-16, MiG-3 and Po-2 planes. He has written more than 20 books and a large number of articles on the history of early Soviet aviation, which have been published in Russia as well as in the UK, France, Germany, and USA. Mikhail has three children and lives in Moscow.

Helion’s latest book is a follow up on the initial volume on Polikarpov’s Biplane designs published in February 2020.  This volume is a square back soft cover includes 276 gloss paper pages. The front cover features a color illustration of the I-17 (TsKB-15) fighter prototype by Andrey Yurgenson; a black and white photograph of Nikolay Polikarpov in May 1935; and a I-16 Type 29 armed with RS-82 rockets.  The rear cover features a color illustration of the TIS ‘MA’ heavy fighter escort fighter prototype in September 1944 by Andrey Yurgenson.  I counted 513 period black and white photographs and 66 black and white drawings.  Although there are no color photos, there are 51 aviation color side profiles (plus scrap illustrations of markings) by Andrey Yurgenson and 45 tables.

Aeronautical engineer and designer Nikolay Polikarpov, the son of a priest, started out preparing for the priesthood, studying at the Oryol Seminary. Nikolay became fascinated with aviation and transferred to St. Petersburg Polytechnical University.  Upon graduation, the young Nikolay went to work for Igor Sikorsky where he contributed to the huge Ilya Mourmets bomber that served in the Imperial Russian Air Force.  The Russian Revolution saw Polikarpov remaining in Russia working at the Dux Aircraft Factory.  There he led the designs of the first Russian aviation aircraft, including the U-2 / Po-2 biplane that would see some 30,000 produced between 1928 and 1952 (some quote as late as 1959).  Unfortunately, Nikolay failed in the development of the I-6 fighter, and he was sentenced to death.  While waiting for his execution, Polikarpov had his sentence changed to 10 years hard labor working at a design bureau set up in a prison.  Polikarpov was able to redeem himself with the I-5 project and was subsequently granted amnesty.   Nikolay worked with Pavel Sukhoi where he developed the I-16 and I-15 fighters.  This achievement led him to win the Order of Lenin and the Order of the Red Star.  Polikarpov was able to establish his own design bureau in 1938, but a year later while on a trip to Germany, he returned to find his design bureau dissolved and all his staff in a new design bureau under Artem Mikoyan.  Polikarpov was later appointed to the Moscow Aviation Institute as a professor in 1943, but died from stomach cancer in 1944.

Mikhail Maslov follows up Volume 1 by diving straight into the TsKB-12, or the I-16 prototype.  Development of each variant, problem solving, and design improvements are discussed in detail.  The Technical Description section provides details of the airframe’s components and sub-assemblies.  Page 79 shows off three drawings showing details of the windscreen, the fuselage skinning, and the internal wooden structure of the fuselage.  The fuselage skin was formed from casein glue over birch veneers on to a mold.    Camouflage and Markings follows along with a discussion of Combat Operations.  This includes combat operations of the I-16 with the Finnish Air Force.  Two Finnish I-16s are portrayed on Page 119, both being the result of captured Russian aircraft that were subsequently restored to flying condition.  The final seven pages on the I-16 are devoted to drawings of I-16 variants.  Page 153 shows off Type 5 variants, including two utilized in the Zveno systems.  The development and operation of the I-16 dominates this volume, covering the first 158 pages.

The remaining 118 pages are dedicated to additional Nikolay Polikarpov designs.  This includes progressions of the I-16 fighter design with a new double row radial engine.  The I-185 was the pinnacle of this design progression with Mikhail Maslov describing it as Polikarpov’s best fighter design.  Page 128k depict two of the I-185 fighter prototypes with three different engines; the M-71, M-81, and M-90 radials.  Like many other design proposals, the double row radial engines went through withering engine development that affected the I-185.  Although the I-185 was hands down the best fighter design in 1942 and was 29 mph faster than the Bf 109F, the fighter design was let down by its M-71 engine.  The Lavochkin La-5 utilizing the M-82 less powerful radial engine emerged the victor.  Engine failures destroyed two of the three prototypes, ending the program.  Nikolay did dabble in additional biplane and twin engine designs as well.  Page 229 shows off drawings of the VIT-1 tank destroyer and the SVB dive-bomber prototypes.  The sections include:

I have to admit that I am a big fan of the Polikarpov I-16 and I have many reference books on the subject.  That being said, Mikhail Maslov, reveals a great deal of new information that I was happy to see.   I specifically enjoyed seeing additional information on the ‘Red Five’ aircraft, along with other less-known variants of the major models of the I-16.  Notable is the use of first person accounts throughout as they bring the reader a sense of “being there”.  This is especially true during the frontline trials of the I-185.  Three pilots were quite excited about the I-185.  All three noted minor, easily fixed issues, and all three were looking forward when the first production I-185s would make it to their units.  Sadly, it was not to be.

It was easy to read Mikhail Maslov’s text and the flow makes it hard to put down, even though this is essentially a reference book.  The over 500 captioned period photographs, drawings, and tables are all impressive.  I would always wish that each photograph would be enlarged to fit an entire page, but I do understand that is a bit unreasonable.  The 51 color profile illustrations from Andrey Yurgenson are great as are the line drawings showing off the variants from Vadim Egorov and Mikhail Maslov cover a lot of ground.  Now, I need to get Volume One of the King of Fighers from Mikhail Maslov to get the same treatment on Polikarpov’s Biplanes!

My thanks to Helion & Company, Casemate Publishing, and IPMS/USA for the chance to review this great book.