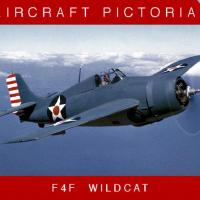 Authored by the well-known and respected Dana Bell, and published by the equally well known “Classic Warships Publishing”, this publication is a “must have” for Wildcat fans, modelers, and historians. It is a recent release, having been published in March of 2012.

In 72 pages, this publication traces the general history of the Wildcat, through its development and use throughout World War II. The reader interested in the historical aspects of the Wildcat will find charts showing the serial numbers for airframes sorted by contract order, paint and camo schemes (shown in color drawings and including both US and British markings, and squadron markings for the aircraft stationed on ships of the Escort Carrier Force. These Squadron markings are, again, shown in color drawings. Additionally, a very thorough and detailed listing covers the Wildcat Units flying off carriers. The information includes the naval designation of the ship, the theatre of operation, the Squadrons involved and the month and year in which the squadron served on board that specific vessel.

The information provided by the author gives the historian a great deal of useful information in a single publication, and that excellent feature is enhanced from the modeler’s point of view, by the inclusion of an excellent selection of b&w photographs, some 3-view line drawings, and the aforementioned color drawing of the paint schemes and squadron markings.

For the modeler, this book is a gold mine. While there is only one color image in the book (the front and back covers are color images) the quality of the b&w images is outstanding. The color image, by the way, is a excellent image of the instrument panel of the FM-2 which is in the NASM collection. The b&w images are a detailer’s dream. For example, on page 26 an overhead view of the cockpit reveals many very interesting details. One can read the numbers and markings on the various dials and gauges visible in the image. Those who wish to “weather” the seat and cockpit can see exactly where the “wear and tear” of use will cause the paint to chip or wear away. And one of the many things I did not know about the Wildcat is evident in the picture. Originally, shoulder harnesses were not included as “standard” and some pilots flew into combat with no restraint system other than the lap strap. One can only imagine that the pilot bounced around the cockpit quite a bit while maneuvering the aircraft.

There are detailed shots of the engine, the landing gear and gear mechanisms, tires (several different patterns of tread), and consoles in the cockpit. Again, the labels on the consoles are so clear that one can read them. (Did you know that there is a “gear position indicator” just forward of the manual hand crank for the landing gear, and that the direction of “crank” to lower or raise the gear was printed on the side console?). Other photographs detail the radio compartment, placement of cameras on the photo-recon birds, the tail wheel (four different varieties of tail wheel were used), machine gun bays and access panels, and the attachment points and supports for under wing stores.

In short, this book is a major resource for the modeler. This publication is highly recommended for the quality of the content, the excellent photographs, and the extensive coverage of the “details” that many modelers seek to add to their Wildcat projects.

Thanks to Classic Warships Publishing for providing a copy of this excellent publication for review.