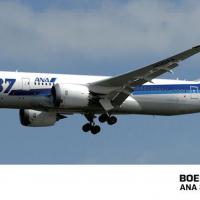 First, thanks once again to Carol Pesch at Hobbico for providing IPMS/USA yet another new item to review. Grateful as always, we are… keep the cool stuff coming!

Here we have a plastic model of a plastic airplane. Admittedly, this new addition to the airways is graceful, and definitely has a different look. When IPMS/USA provided me the opportunity to build Hasegawa’s new ANA 787, it was an easy choice. I am hopeful this bird is as successful as everyone expects!

I tend to build rather fast; that has pitfalls, but in the case of this model, the build only took three separate sessions; the painting and decal effort added another six! The kit consists of approximately 57 parts; included is the standard metal screw weight thorough the forward internal bulkhead to ensure the nose sits on the ground. A smoke-gray clear stand is included, along with gear doors in the closed position if you choose to show the model in flight.

One really nice thing about this new kit – no clear canopy to pretend to look through, mask, etc! The outline is clearly marked for the decal to snuggle into (no crooked-glasses look to the front!), and the overall parts fit is spot-on, so we have a good start right off the bat. The blue-gray for the window decals looks better than black, and the mounting frames are already on the decal, complete with windshield wipers. Very cool.

I used no putty, just Tamiya’s extra thin cement for a “squeeze seam”. Sanding sticks for the ooze, wet/dry to clean up the seams, and done. This was the first Hasegawa airliner I have built where I attempted to clean the seam around the molded-on centerline antennas; it actually worked out. This brings out the second nice thing – extra antennas are provided so the nominally careful among us can replace antennas that pling into the stratosphere while cleaning up the seam. These are EXTREMELY small, but better than Photoetch, in my opinion, in that the plastic fuses to itself verses having only a surface grip.

The wing dihedral is molded into the full-span lower section, and the thin, sweptback tips are very well done. These act as flow winglets in flight on the real thing, helping to lower drag and improve fuel economy, one of the Dreamliner’s selling points. The whole wing is a tight fit to the fuselage and required just a touch with the sanding pads to blend everything in.

The engines are six-piece assemblies; the fans and intakes are separate, as are the bypass duct and exhaust assemblies, and with careful painting look the part. NO NASTY SEAM ON THE INTAKE INTERIOR!

At this point, I primered the model with black scratch-filling Duplicolor automotive primer, lightly sanded to clean up blemishes, then applied white Duplicolor auto primer, followed by about three coats of gloss Duplicolor, lightly misted on. The underside was masked and painted flat Gull Gray from a Testors rattle can; I used bare metal foil for the leading edges, with Testors chrome silver enamel (small bottle) to match areas where the foil would not behave.

Decaling was next. I did one side of the jet at a time, and encountered no problems; the decals were robust enough to do the job without tearing. Only one area required a bit of touch up paint, and that was behind the rudder. The passenger windows were coaxed into line; no engraving or existing windows to worry about, so it was easy. A lot of stenciling too…hatches and doors with their exit markings were simple, one-piece affairs that fitted perfectly to the engraved door areas. I only had difficulties with the wing walkways, as they are individual miniscule stripes and tore easily. Not the decal’s fault, but mine…when finally coaxed into place with plenty of water, they settled in. The engine spinner “we are running” swirl-mark decals were intriguing; I didn’t do well on them, but they are ok in the end. None of the decals required solvent; we truly live in a great time for modeling where the decals, from the box, work great first time!

Final two protective coats were Duplicolor clear gloss acrylic lacquer. No change in color, just a nice gloss…with Duplicolor (available at auto parts outlets), I have finally found a paint that doesn’t eat everything underneath it but will dry fully and not be tacky. I don’t know if they make a flat, but if they do I’m scarfing the building’s worth! No more of Sticky-lon’s gloss and flat enamel that capture every fingerprint!

Landing gear installation was the last session; take your time with painting and assembly and it will all work out. The stabilizers were a tight friction push-fit into place at the very end, no cement required.

All in all, another 10-rating model to the fleet. An impressive effort by Hasegawa; thanks again to Carol for providing the kit for review, and IPMS USA for passing it on to me to build!